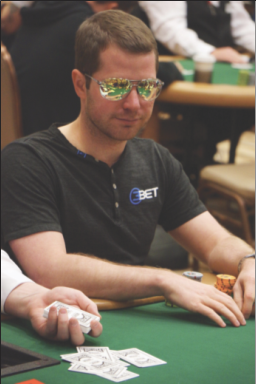 A while back in preparation for my book “Strategies for Beating Small Stakes Poker Cash Games,” I spent some time playing live $1/2 no-limit Hold’em. I learned so much from the games that I hosted an in-depth four-hour long webinar explaining my findings. Near the end of the webinar, I discussed many mindset flaws that most of my opponents demonstrated. If I could teach my opponents one thing, it would be to stop caring about losing money due in common, routine situations.

In my mind, there was nothing to see here. This was a simple all-in and call scenario that both players played well. I was somewhat surprised to see that no one else at the table felt the same way. Some of the players were trying to console me for the horrible beat I took (because the ace came on the flop and the 10 came on the river). It should be clear that when you get all-in, the order that the cards come off the deck does not matter in the least bit. Other players were congratulating my opponent because he got his money in good with a “made hand” and I only got my money in with a “drawing hand.” This is also asinine because both hands are quite premium, given my opponent’s decision to play with a tiny stack. The fact that one hand is paired and the other is not is irrelevant. All that matters is both hands will win roughly 50% of the time.

It was also interesting to me that the players even cared about a pot where both players put in 30 big blinds with premium hands. In high stakes games, most players typically swing at least 200 big blinds over the course of a long session and don’t blink an eye. However, in the small stakes games, everyone truly cared when they lost any pot over 10 big blinds. The entire player pool seemed to not understand that swings in poker are inevitable. Instead of accepting this fact, most of the players were only willing to invest significant money when they were confident they had the best hand. This led to most of the players using a blatantly straightforward strategy that allowed me to consistently steal small and medium-sized pots with little risk of losing a significant pot.

You must accept that you will win and lose pots when you play poker. If your game plan is to wait around for the nuts and hope your opponents pay you off, unless most of the players at your table are maniacs (I only encountered one maniac in all of my $1/$2 sessions) you will slowly blind off and lose the rake. In order to crush small stakes cash games, you must be willing to get a bit out of line in order to steal small pots when it is clear no one is interested. That said, you must also be capable of making somewhat big folds when it is clear your opponent loves his holding.

I got the vibe that my opponents cared about any loss most likely because they were playing with a short bankroll. If you only have $500 to your name and take $200 of it to the poker table, I completely understand why you would care about the swings. I imagine most pros would lose their minds if they put 40% of their disposable income (or net worth) on the table at one time. Even though most of the players adopted a style of play that indicated they clearly did not want to gamble, their poor bankroll decisions stated the exact opposite.

Learning to think in terms of equity (instead of dollars) is a great way to conquer this fear of losing money. If you understand that when you get your money in good, such as when you get all-in with A-A versus 7s-6s, you will win in the long run. You will not care if you win or lose on any individual hand because you know you profited, in terms of equity. Instead of being happy for making a good decision, most of the players I played against would be incredibly unhappy if they lost that all-in.

When you get all-in with 77% equity, you must understand that you will only win 77% of the time, not 100% of the time. 23% of the time, you will lose. My opponents did not fully grasp and accept this concept. You must become comfortable with the standard swings of the game if you want to move up to the higher levels, where the variance will be much higher (due to overall increased skill levels and more loose, aggressive play). If you lose your sanity every time you lose any half-way meaningful pot, you are almost certain to fail.

In the webinar, we reviewed 30 educational hands I played that led to me winning a significant amount, and also covered a few more detrimental mindset flaws. For the recordings of the exclusive webinar visit www.jonathanlittle poker. com/livecash/.

Jonathan Little is a two-time World Poker Tour champion with over $7,000,000 in tournament cashes. He is a prolific author, coach, and owner of PokerCoaching.com. You can occasionally find him playing and commentating at Stones Gambling Hall in Citrus Heights. This article and more can be found at www.jonathanlittlepoker. com/blog/.

Previous PostFine dining at Table Mountain Casino Next PostYou made my day!