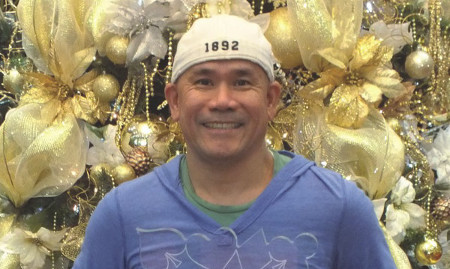 Twenty-four years ago when Ian Malabanan moved to South San Francisco from the Philippines he never dreamed he would wind up playing poker for a living, let alone being named the Northern California Poker Player of the Year for 2015.

For years he worked part time for his brother-in-law driving a truck delivering adult products. Then in 2001 he got another part-time job as a bus boy at Lucky Chances Casino in Colma. “I keep watching those players to play. I don’t know how to play this game. What is the technique? I keep watching,” he said.

“When I know those players play the game and then I see what’s going on. Okay, I try to play at home and then, oh my god. I donate a lot of money because I just push, push, push because you know I see this is not the technique maybe. I saw one good player on TV. I was watching on TV, too. All those pros know how to play, so I just keep watching. Then, I try a $65 buy-in, a $25 buy-in. That’s only small tournament. Then, when I win first time, oh! This is the way how to do it right. I kept going. I keep playing. I quit my job at my brother-in-laws work. I gave that up.

The buy-ins kept getting bigger as he found people willing to stake him regularly in Lucky Chances’ tournaments. When a $500 buy-in tournament was coming up he was asked if he was entering and told them, “I don’t want to pay. I have no money. I have not enough money to play that kind of tournament. I start with $200 buy-in, $300, and there’s a lot of people asking, ‘Ian, how come you didn’t play? Okay, yes, I put you in $1,000, $3,000 buy-in,’ and then I keep winning. Sorry, my brother-in-law. I quit my job.”

When asked if he has a system that helped him be so successful he said, “Uh-huh. The technique is, before I’m okay, all-in, all-in, bluff. Now, I just wait, patient. Don’t be aggressive. 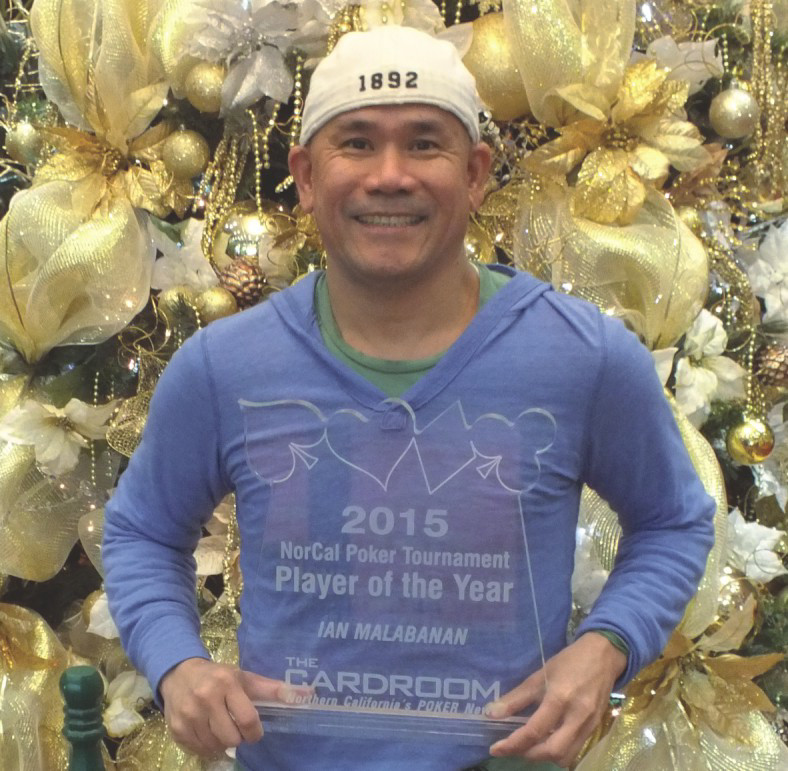 “I know the technique. If you are short stack, even though two chips, I don’t want to lose hope because two chips, three chips, it’s okay. I’m still okay. I don’t want to give up. Just keep playing because last time, I got only one chip to win 75 chips and make it 20,000. Then, the only one thing is when I lose, is accidents happen. That’s why they call me ‘accidents happen.’

“It’s easy. Tournament, if you play you can make final table three times if you play smart, but if you play, ‘Okay, I have an appointment, just push all-in,’ so just take your time. Don’t rush yourself. Even though you’re short stack, don’t lose your hope. Just play your short stack and then … some other player, they got 2,000 because if you got short stack, you can surrender and buy a new one, but for me, no way. I just play.”

When asked for his initial reaction upon hearing he had won the POY title Malabanan said, “You guys surprised me. I didn’t know … you know what? Because last year, I’m always ahead and then, [three-time POY] Rellie [Sigua] and Jimbo [tournament director Jimmy Manansala] told me, ‘Oh, Ian. Congrats.’ ‘How come you congrats me? Why?’ ‘You’re POY.’ ‘No.’ And then you called me, right? You surprise me I’m the POY. I can’t believe it. Maybe I’m not deserving to be a POY. Not me, but I know when you guys called me, ‘Oh, finally.’

“This is your job, so just love your job, man, playing poker. If you are some other players, they bust head. I always happy. You play everyday, just accept your bad beat situation. Don’t be angry. Yeah, of course, don’t be stressed. You play everyday. You come to Lucky Chances no money and then, when you go home with money.”

The 2015 POY contest was by far the closest race The Cardroom has had in the eight years it has been held. Usually someone breaks away from the pack by July or August and runs away with it. This year though, the points were tightly packed and Malabanan didn’t even take over first place until late October.

In the end he edged out Tuan Mai of San Leandro by less than 250 points and Redwood City’s Greg Pincombe by about 800 (Pincombe held the lead for most of the year).

Previous PostGood, bad & ugly Next PostLiving the poker dream pt. 1: The road to the Main Event