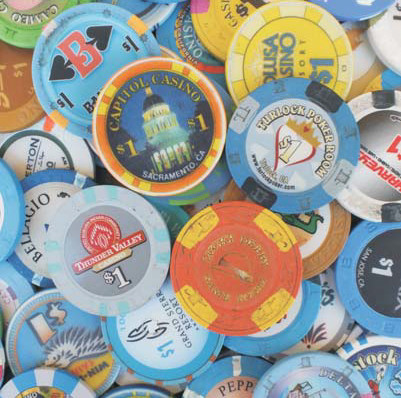 Hard to believe it’s been seven years since the first issue of The Cardroom was released—all eight pages and 12,000 copies of it. As we begin our eighth year we find ourselves focusing on things beyond just poker and hard copies of the paper.

Our first big step into the 21st century is our new online edition. You can go to our website (www.thecardroom-norcal. com), click in the appropriate spot and you’ll be able to read the whole paper, front to back, and even click on ads to go to the advertiser’s website.

As my partner in crime Paul is fond of saying, “We’ll never run out of papers again.”

Right now we’re just getting our feet wet, but we have big plans to get on the social media bandwagon, too. Hit the “Like” button on our Facebook page and follow me on Twitter (@RandallRapp). We’ll be doing our best to keep you informed of what’s going on in NorCal gaming, so come along with us now and let’s get the ball rolling.

In the meantime, let’s go play some poker.

With a few hours to kill before the big POY tournament at Lucky Derby and Mrs. A out shopping with her sister, I found myself with plenty of time to drop in at Thunder Valley. Unfortunately I ­didn’t have enough time to enter their Saturday morning tournament, but they seemed to be doing just fine without me as it looked like they had close to 100 entries.

I decided to content myself with a seat in their $1/3 no-limit game and see what I was up against. The table consisted of players young and old, good and not so good … in other words, a fairly typical sampling of poker players at this level.

I started off slowly, winning a few and losing a few, but staying about even. I found myself down to about half my starting stack at one point and was thinking about a re-buy, when one of the more aggressive players decided to do me the courtesy of a double up.

Then I managed to get on a bit of a heater just before quitting time and picked up to go with a healthy profit to start the day. Mostly though, I left feeling like I need to get back here again when I have time to take more advantage of their other amenities—maybe even for the Heartland Poker Tour series in September.

Mrs. A and I were both raring to go when the annual Cardroom Player of the Year tournament began at the Derby. After saying “hello” to Kirk Schayltz and making sure that our POY Rellie Sigua was settled in, I took my seat and got ready to play.

I’d like to say I made a deep run, but after the usual ups and downs (and taking advantage of the add-on) there was no way to get away from my long streak of bad cards. The worst part wasn’t that Mrs. A had once again gone deeper than I did. No, that was losing my $10 last-longer bet with Lucky Chances tournament director Bob Bloom (for the second year in a row) who had once again come to Citrus Heights for the tournament in Rellie’s honor.

While Mrs. A continued to plug along I plopped down at the $1/2 no-limit table since I needed to stick around for the tournament’s conclusion. My focus was a bit split and it showed in my play. I wound up giving up about half of what I won earlier in the day.

When Mrs. A was eliminated (in a very respectable 14th place, but unfortunately shy of the money) we went over to their sports bar for a nice cold beer and a hot meal. Both were very tasty and really hit the spot.

We arrived at the Capitol Casino in plenty of time to get our entries paid for the Sunday morning tournament and walk over to their café for some of their great breakfast. The tourney has a buy-in of $120 with one optional $60 add-on. Some like to take advantage of the add-on as soon as they sit down, while others wait until they go bust and treat it like a re-buy. I prefer to wait until I get low but not out so I’ll have more than a starting stack, or wait to the last minute in the hope that I’ve accumulated enough chips to skip it entirely.

Once again though, my tournament mojo was nowhere to be found and with or without an add-on I was doomed shortly after the first break. Mrs. A, on the other hand, skipped the add-on and made another excellent and deep run before going card dead. She once again finished just shy of the money.

While I waited for her I took a seat in their $6/12 game. For quite a while everything was going great. I won some big pots and accumulated a lot of chips. Then the worm turned and suddenly all my hands were second best (or worse) and I watched as my nice big stacks were slowly but surely whittled away. When Mrs. A was done with the tournament I was plenty willing to pick up what was left of my chips and start the drive home.

As we were headed south we realized we were getting hungry and had been craving pizza all weekend. Turlock seemed like a good place to stop and I knew just the place to go. I had eaten at Figaro’s Pizza on Monte Vista Ave. once before and it was quite memorable so that’s where we landed. I got the carnivore special and Mrs. A had something with a bunch of vegetables and stuff on it. We both loved it.

“You know,” I said, “I’m pretty sure Turlock Poker Room has a Sunday night tournament if you’re not quite done yet.” Turns out it was starting about 45 minutes after we finished eating—perfect timing—and Mrs. A readily agreed to give it a try now that we were both well fed.

Once again, Mrs. A plowed through most of the field, making the final table but sadly going out on the money bubble. Still that was three tournaments and three deep runs. It’s only a matter of time before that next big win shows up.

Case in point: Your humble Ambassador, despite not having shined very bright in the previous two tournaments, seemed to be making the right decisions and getting enough of the right cards to make the final table as chip leader. I never looked back. When the dust settled I had claimed my victory and a handsome payday that made for a wonderful (and profitable) end to a great weekend.