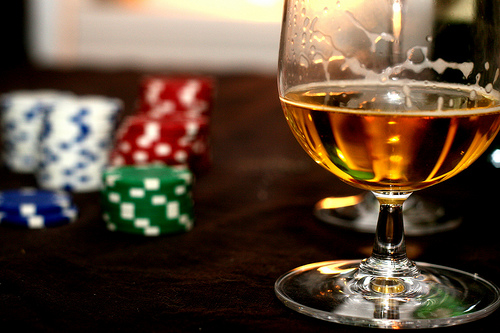 A small twist of fate

The CardroomJul 10, 2013Casino Updates, July/August 2013, NorCal Poker AmbassadorComments Off on A small twist of fate

So there I was, busted for the umpteen-zillionth time. My last few bucks spent on four $1 chili-cheese dogs and a 16 oz. beer. I’m in my late fifties now and the comebacks ain’t as easy as they used to be.

The phone rings with word about a job. I drive an hour the next morning and I’m hired. I round up a couple hundred from a friend and pay for the work permit. With eighty bucks left, I head home.

But I get on the freeway going the wrong direction so I take the first exit and next thing I know I’m right back at the cardroom. Hmmm …Omen.

I know it’s a bad idea, but I go inside and gamble all night showing a small profit. As I’m leaving, the floor man who’s a friend of mine talks me into trying their new $3/6 Hold’em game which has one seat open.

The phone rings again and I go to pick up another friend. We’re off to San Francisco for a book signing party where I meet a girl. I tell her I’m gonna roll uptown (where all the fancy restaurants, hotels, bars are) and she wants in.

We start at the Huntington Hartford Hotel and Big 4 restaurant. It’s a classy joint. The money starts flying (I haven’t had any in years)—$100 to the doorman, $100 to the piano player, $100 to the bartender where we’re having extra dry gin martinis.

The next five nights we eat at Scoma’s. Lobster Thermidor, Crab Cakes, Prawns Bordelaise, etc. We hit every high class joint in the city. Then it’s the Bella Vista on Skyline Blvd. Steak Diane, Cherries Jubilee. Seven weeks later the run comes to an end at The Plumed Horse in Saratoga where we end up at the bar drinking a 100-rated Port wine at $90 a glass.

I take her to the airport that night and she flies off to Australia. I’m driving home and I’m almost out of gas. A cardroom I used to work at is just a few blocks away. I pull up at the back door and my old buddy Kevin is outside. I tell him about my escapade and … I need $10 for gas.

I sell the Cadillac a few days later and get an old Corvair. I blow that money the next couple weeks drinking and gambling, and there I was, busted again for the … well … you get the picture.

Pat Kelley has been a poker dealer for over 40 years and has worked at over 40 casinos. He currently lives in Saratoga and is a dealer at The Palace Poker Casino in Hayward. And yes, he’s still busted.