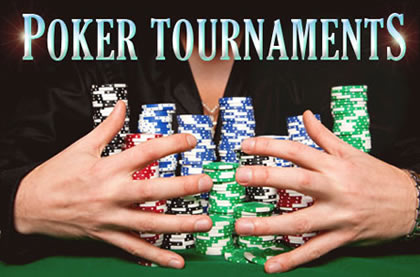 Adjustments to make when playing in small, fast, local tournaments

The CardroomJan 10, 2014Casino Updates, January/February 2014, One from the vaultComments Off on Adjustments to make when playing in small, fast, local tournaments

This article appeared previously in The Cardroom’s September/October 2007 edition. Due to the continued popularity of these tournaments, we thought the information was still relevant and it was time to share it again.

When you play in these tournaments, you are really playing in a “turbo” or “speed” tournament. For those trying to apply normal tournament strategies to these quick tournaments, the experience can be futile and frustrating.

There are two easy ways to reveal the true nature of the blind schedule of tournaments. One is to compare the size of the blinds at the end of each hour or break, the other is to see how many times the blinds double throughout the tournament.

This type of prize structure benefits the players that are aggressive gamblers who border on maniacal. Their willingness to gamble in big pots gives them a huge advantage over their opponents when they win these pots. If everyone waits for premium hands in the later rounds, it truly becomes just a game of chance.

If your favorite local tournament follows this format, then you should adjust your play and strategy accordingly. Here are some tips for playing in these quick, small, local tournaments.

When you’re a regular at a weekly tournaments, choose a strategy geared to long term goals and gauge success in the long term. By using a more aggressive approach there will be many weeks when you go home early, but you will also give yourself more opportunities to win. And with the top-heavy and limited prize structures, success is at the top 10 percent.