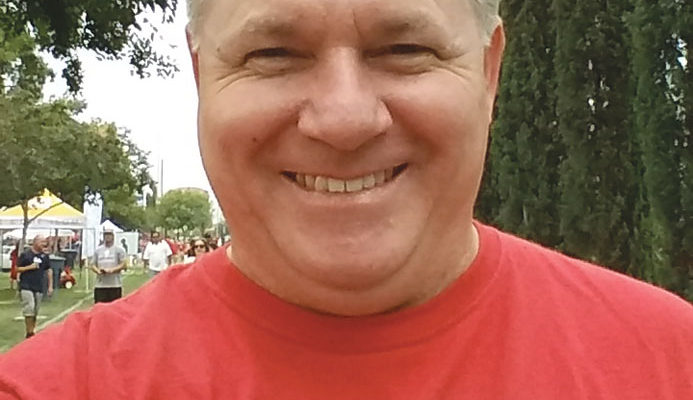 All-in is all in a day’s work

Bill PattySep 18, 2018Guest Blogger, September/October 2018Comments Off on All-in is all in a day’s work

It’s 8 a.m. Tuesday and I have been at work for an hour. The overnight crowd leaving has outnumbered the morning crowd arriving, so two seats are open.

I sit down in the $4/8 Hold’em game made up of mostly the usual crowd with a few new faces. On the third hand I pick up K-K, raise from early position and get three callers. The flop is J-4-2 rainbow. I bet and get two callers. The turn brings a 9. I bet and get one caller. The river is another 4. It looks like a great card to me, until I get raised and lose to Q-4 off suit.

I play in the game for almost two hours and finish down $10. I guess I can live with that.

After my lunch break we start the $1/3 no-limit game and I buy in for $74. Why? Because that was what I had in small bills and the game fills up pretty quickly so I’m not likely to be there long.

Two orbits in there is a small raise from early position, two people call in front of me and I call from the button with 5 5. The flop comes 5-6-7 with two diamonds. The original raiser checks and the next player bets $8. I raise to $20 and only the bettor calls. The turn is a black king. I push all-in and lose to pocket sixes. I rebuy for $100 and leave the table 45 minutes later with $153, down a total of $31 for the day.

Around 2:15 p.m. we start the $4/8 half-kill Big-O. (Big-O is basically pot-limit Omaha split high/low with five cards dealt to each player instead of the normal four.) This game has become very popular at Club One, and we run multiple tables on Tuesdays and Wednesdays. By 2:40 my $100 buy-in is down to $23 after missing three big draws. By the time I finish work at 3:30, I have $194 in front of me and finish the day up $63, a typical prop day for me.

Yes, it is work. For a shade under $20 an hour I am one of the casino’s insurance policies. Some days I play eight hours, others maybe two or three. When I get in a game it can be for anywhere from a minute to several hours.

Like all poker players, I can run good or run bad. I can leave work losing my pay for the day, plus the money in my wallet.

The biggest hand I ever won was in a no-limit game. We went to the flop four handed and when I pushed all-in on the flop, one of the players said something that convinced the other two I was on tilt because I had been rivered the previous two hands. All three of them ended up going all-in and I showed the A-A for the winner.

It’s a living. One that can be fun, crazy, extremely irritating, mentally stimulating, mentally fatiguing, frustrating, and all of these in one day. When I go to work, I expect to win. Losing is depressing. Such is the life of a prop—nine years now and counting.

Since the last issue, I spent four days in Reno, one day at Cache Creek, and one day at Red Hawk Casino. Let me start by saying it is a shame that Red Hawk has turned a nice six-table cardroom into two poker tables scrunched behind some blackjack tables. The poker staff at Red Hawk is one of the finest you will find anywhere. Cyndi, a poker dealer and supervisor there, was awesome! If you are listening, Red Hawk, please return this room to the loyal poker players of the area. Be proud of the staff you have and understand the importance of poker to your whole casino!

If you haven’t been to Reno lately, it is time to go. The Silver Legacy has put in a really nice poker room consisting of about 12 tables and an excellent staff. During my stay, I played seven card stud plus no-limit and limit Hold’em. They also have Omaha and tournaments.

It was, overall, my favorite place to play during the trip. And since you will be going, and we all like to eat, let me give you four awesome places you don’t want to miss. The first is the Atlantis buffet. This is the best buffet I have eaten, anywhere. Save room for the custard filled chocolate eclairs.

In the mood for an awesome latte or a cup of tea in a real cup? Take the short walk from your downtown hotel to Hub Coffee Roasters along the Truckee River and pair your beverage with some homemade banana bread or one of their other delicious morsels.

Did someone say two complete steak dinners for less than $26? Do yourself a favor and enjoy a perfectly prepared steak at Cal Neva Club, served by people who still know the meaning of customer service.