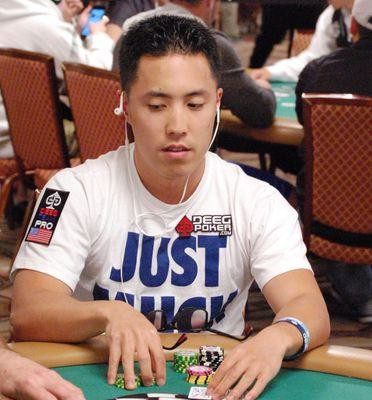 Allow Me to Introduce Myself…

Kyle KitagawaJan 16, 2016Guest BloggerComments Off on Allow Me to Introduce Myself…

My name is Kyle.I go by “@Cali_kiddd” on Instagram and “@Kylek_poker” on Twitter. I like good food, travel, working out, wine, beer, women, sports, dogs, people, and poker. I have been a profitable poker player since 2010, and I have been playing full time for the past couple of years. Although I am uncertain about how big of a role poker will have on my future going forward, I do have several experiences from my journey that I plan on sharing as well as the decisions and transformations in life that I make going forward. Poker is not just a game of chance. It is a lifestyle that requires both emotional and mental stability, an understanding of probability and variance, a desire to learn, and a healthy balance of exercise, nutrition, and family or friends. To succeed in poker, you also need dedication, discipline, and a lot of patience. My plan is to discuss my experiences in each of these topics along with some hand analysis and strategy, and hopefully some of you can relate either if you’re an upcoming pro or someone considering playing full time. Maybe you’re even like me and are currently playing full time, but considering other career paths. Whichever your case is, I am sure you will gain something valuable from this blog even if it’s just entertainment purposes.

Like many others, my poker journey began during the poker boom in 2003 when I watched Chris Moneymaker win the World Series of Poker Main Event on ESPN. I was only 18 and had recently graduated high school in El Cerrito, CA. I was on the high school debate team and had received national recognition during my senior year and had been talking to debate coaches from schools such as USC, Dartmouth, and Berkeley. Up until this point, I had planned on eventually going to law school to become a lawyer, but all that pretty much changed when I chose UC Davis to be with my friends and eventually joined a fraternity. I had way too much fun freshmen year, but let’s focus on how it involved poker.

There was a group of probably around 50 or more freshmen inthe dorms that were into poker that year and some of them had organized a nightly .25/.50 no-limit Texas Holdem game with a $10 to $100 buy in (although average buy in was $20, and $100 was super rare). It probably wasn’t the best idea to host the game downstairs in the dorm lounge because eventually the Resident Advisors shut us down towards the end of the year, but that’s another story. In the beginning, nobody knew what they were doing in these games, including myself. It was a straight donkfest. Everyone just wanted to wait for their turn to say “all in” and see the cards run out. A few hundred dollars would change hands at the end of the night (or early morning) and we would do it again the following night. Come to think of it, I’m not sure if I ever studied that year of college. I met a lot of people though, and when my freshman year came to an end, I moved into an apartment with a few friends. There we hosted our own $5 and $10 buy-in home games with a group of about 20 players during my second year of college.

One night, after I busted out of the $5 tournament in my living room, I joined the second table of busted out players in the kitchen who had started a .25/.50 no-limit cash game. I bought in for $10 and lost. I bought in again for $10 and lost. Compulsively, I bought in for $10 a third time. I lost. At the time, none of us understood the concept of variance or short stack vs deep stack play. Everyone was buying in for $10 at a time without realizing that it was only 20 big blinds and that stacks weren’t deep enough for turn or river play. The obvious result was a lot of coin flips, and that particular night I didn’t win any of them. Super tilted off of my $35 loss, I went to my laptop (which I would later throw off a balcony… we’ll get to that story later) and signed up for Party Poker. This was a life changing moment for me. I deposited $25 and lost. I deposited another $25 and lost. Furious and tilted, I deposited the last $50 I had in my bank (broke college student, remember?) and I grinded until 7:00 AM before I finally doubled up to $100! I quickly cashed out and told myself that I would never ever play online poker again. That didn’t happen. In fact, it turned out to be probably my most degenerate year ever lol.

Later that year, I got a job serving at a local sushi restaurant in Davis. This, for the most part, helped me pay for my “learning expenses” in poker. Over the course of the next couple of years I remained a pretty bad player. I wasn’t doing much to improve my game from a strategic point, and I was living the drinking/party frat boy life which was not good for my mental or physical health (again, I’ll touch up more about health and poker later). Majority of myplaying time during this period was online either on Party Poker or Ultimate Bet and I was playing as big as $5/10 no-limit without exercising any sort of bankroll management. I had developed a much better understanding of the game just from the sheer volume of hands played, but without knowing anything about bankroll management or proper mindset, variance and tilt eventually ended each of my runs.

In the summer of 2006, I started reading Super System II, and it transformed my entire perspective on the game of poker. I’m going to skip some details here and save it for a future post, but a particular chapter in this book helped pave the path of my poker career. I ended 2006 with a positive upswing of nearly $30,000 from online cash games in just over two months, and for the first time in my poker journey I felt like a winner. It also gave me a new form of motivation to improve my lifestyle, except that didn’t happen right away either.

So there you have the beginning of my poker journey in a nut shell. I was young and dumb! I hope you’re not bored already, because I’d like to share the second half of my journey up until this point before I beginbreaking down the specific aspects of playing poker for a living. In the meantime, don’t forget to follow me on Instagram (@Cali_Kidddd) and Twitter (@Kylek_poker) for live cash game pictures and tournament updates! And, if you like any of the poker apparel you see me wearing from DEEG Poker, you can use “KYLE10” as a discount code at http://www.Deegpoker.com!