Home Featured Stories Always be careful what you wish for 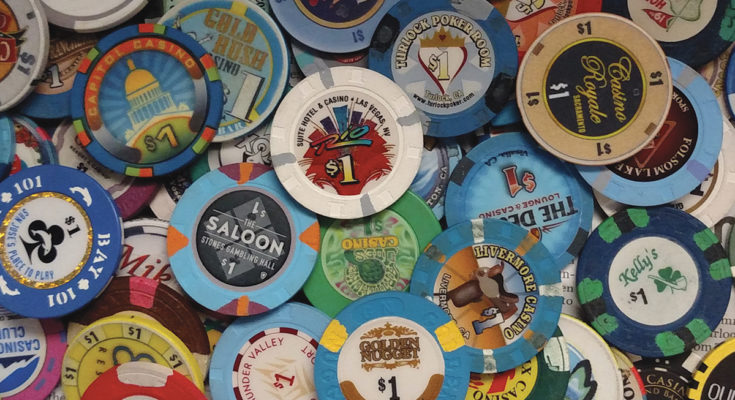 Always be careful what you wish for

Randall RappJul 18, 2018Featured Stories, July/August 2018, NorCal Poker AmbassadorComments Off on Always be careful what you wish for

Sure. But over and over again?

I recently made my annual pilgrimage to Las Vegas for my one shot at WSOP fame and glory—the Seniors Event. I like this tournament for several reasons. The buy-in is low for a bracelet event ($1,000), the field is huge (a record 5,918 entries this year, breaking last year’s record 5,389), and the relative lack of drama that comes from having no one under 50 at the table.

The other good thing is that the levels are one hour long, which helps make up for the one bad thing—you start with only 5,000 chips. So you have time to be patient, but you have to treat those chips with care unless you’re taking the go-big-or-go-home approach.

When the tournament began Friday morning the blinds were 25/50 for the first hour. That means everyone has 100 big blinds and plenty of time before the next level, so there is no need to get too loose. Wait for that good hand and do your best to get paid off while keeping losses to a minimum.

And that’s where the story becomes interesting. During that first hour I got more big pairs than I ever have in an hour in my life—probably more than anyone typically gets in five or six hours. I was dealt aces, kings, queens (twice), jacks, tens, and nines (twice).

Sounds like a recipe to a nice fat stack to start round two, doesn’t it? Yet when the hour was up, half my stack was gone and I still don’t think I misplayed any of the hands.

Early on I got the pocket nines, actually turned a set and scooped a nice pot. Everyone folded to my preflop raises when I held aces, queens, and jacks. Net profit—75 per hand. And then the boards were bad with the kings, queens, tens, and nines so that, despite preflop bets, and continuation bets, I could not continue to risk precious chips on boards that showed straights and flushes and all I had was a pair, especially when the other players (with equally precious chips) were eagerly making big bets.

I managed to fight my way back from the good fortune of all those nice pairs and got about halfway through the first day before I was once again short stacked. Everyone folded to me in the small blind, so when I saw A-9 it was an automatic shove. Unfortunately high-stakes-seen-him-on-tv-guy Dan Shak was in the big blind and had an equally automatic call with A-Q.

Here endeth the lesson. Big pairs don’t necessarily mean big (or small) wins; play each hand the best you can and the results will be what they will be; always be careful of what you wish for; and never shove in front of a famous poker guy in the big blind—they’ve always got it. That’s why they’re famous!

If, like me, you’re fond of the WSOP Seniors Event and, also like me, you bust out early, there’s a great second-chance opportunity downtown at the Golden Nugget. On Saturday they hold their own Seniors Tournament for about $250 and it too is getting bigger and bigger every year. There were nearly 900 entries this year, many more than their room can accommodate at once. There were so many alternates and re-entries that their regular 1 p.m. tournament didn’t start until nearly 5 p.m.

Without going into the ugly details, let’s just say that I spent way too much time on a short stack but still managed to make it through two-thirds of the field. Not enough for the money, but enough to massage the ego at least a little bit.

We also had a great time riding the monorail to the north end of the strip to check out some of the newer places like the SLS Casino. As a casino it was, well, a casino. Lots of shiny lights and slot machine noises and loud craps players.

Where we hit the jackpot was in our selection of a restaurant. We went to Cleo for the Mediterranean cuisine and it was outstanding. We had flatbread and hummus and salads and kebobs and chicken and sausage and great cocktails and I don’t know what all else. All I can say is they didn’t miss a step in terms of food, drink, or service—six stars!

In closing I would like to congratulate Matthew Davis for his victory in the Seniors Event in his first year of eligibility. Six times I’ve taken my shot and yes, I’ve cashed three times which isn’t too bad if I do say so myself. Now this Davis guy just shows up and acts like he owns the place and takes the whole shebang down. Um, what I mean to say is, “Well done sir.” Seriously. If the title couldn’t come to my house at least it’s coming to our neck of the woods. I suppose I could wish for that. 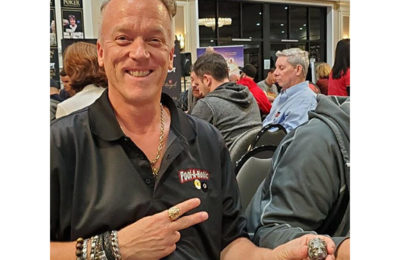 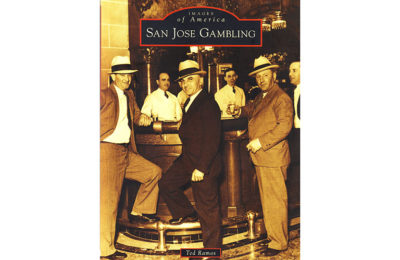