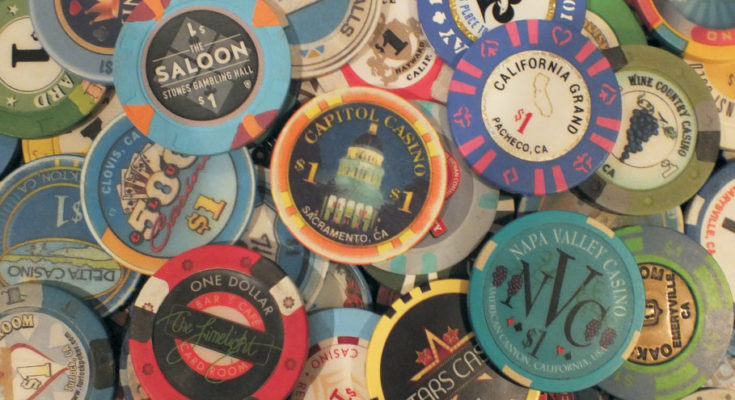 Ever since New Year’s Day I’ve been struggling to come up with some good resolutions for 2017. It finally dawned on me why it has been so difficult: I hate New Year’s Resolutions!

If I wanted to work out more, eat better, and quit gambling (or at least doing it badly) I should have started months ago. Why wait for an arbitrary day on the calendar, especially one that take place when it’s bitter cold and you just want to huddle up with a beer and pizza while watching a game that you may or may not have put a wager on?

From now on I’m saving all my resolution for springtime, when it’s warm and comfy and everything seems possible. I’ve got just the date for it too—April 1.

I’ve always appreciated California Grand’s (relatively) new facility, and when I stopped in on a recent Thursday afternoon it was no exception. The place was spacious, well lit, attractive, and busy. I got into a $3/6 game fairly soon and, after a couple of orbits, was called for the $6/12 game I had my eye on.

I’ve done quite well at California Grand in the past, but this wasn’t going to be one of those times. Sometimes you’re the bug and sometimes you’re the windshield. I won some hands, sure, but could never quite get any momentum going. I thought a table-side pizza might focus my attention and help bring about a change in direction.

No such luck. The draws weren’t coming and the good hands weren’t good enough, often enough. I would have liked to stick around longer, both to appreciate the ambiance and benefit from the turnaround that just had to be coming, but the road beckoned, so I licked my wounds and headed north.

It had been raining all day (I know, it was weird—water falling out of the sky!) when I pulled in at Napa Valley Casino. They were playing $4/8 and no-limit. I took a look at the stacks on the no-limit table (too rich for my meager bankroll) and signed up for the $4/8 with kill.

The wait wasn’t too long and I took a seat resolved to recover some of my earlier losses. This game was much looser than earlier in the day, so I opted to play toward the tighter end of my range, knowing I would get paid off if I could make some hands.

It worked … to an extent. My made hands were raking chips more often than not, but my drawing hands still weren’t filling in. I wasn’t losing ground, but I wasn’t making any up either.

There was an old timer named Bob sitting across from me who just couldn’t seem to lose. As I watched jealously, he stacked chip after chip until he finally gave in and had some colored up. Still the chips kept flowing to him like the table had been tilted his direction. I noticed that a lot of the hands he was winning with weren’t very good starting hands, and wondered whether he could hang on to his bounty.

The answer, as usual, was “no.” Within a couple of hours his red chips had turned back into blues and he had less in front of him than when I arrived. I’m sure there’s a lesson in there somewhere ….

My own fate during this session, after a series of ups and downs, at least ended on the upswing. When the hour got late and it was time to cash in I was ahead a little more than a rack. It felt like a million bucks.

Despite the fact that it’s been open for more than two years, Stones Gambling Hall still has that shiny new feel to it. It sparkles in a particularly inviting way so you feel at ease and comfortable right away.

They had a $3/6 game going, but I opted for the $1/3 no-limit game this time to change things up. For several hours I battled with locals, mostly holding my own but not really getting the better of them either. The bright spot of the afternoon was the plate of pulled pork sliders I ordered for lunch. Oh yeah, that was good! They really do an excellent job in the food department.

They wound up breaking my table and I was moved to a different one, which turned out not to be a positive. The whole dynamic was different, so it was definitely a matter of starting over. Apparently they moved me to the shark’s table and it ­wasn’t long before the fins in the water were circling. I shifted to a tighter gear, but the cards weren’t cooperating. Down a buy-in and a half I threw in the towel and retreated to the sanctuary of my car.

The Limelight is a small, cozy, den-like cardroom, but I understand they have big plans for expansion and upgrades. I’m looking forward to seeing where they go with it. The game this Friday night was $1/2 no-limit. The action was an interesting combination of many tiny pots followed by sudden huge chip distributions.

The table was a fun mix of obvious regulars, occasional travelers like me, and a few first timers. I especially like seeing new players at the table, not so much to take their money, but because the poker community always needs new members. We should do all we can to graciously help them and make them feel comfortable. Then take their chips.

There were two big highlights during my visit to the Limelight. The first was the barbecue sandwich I had for dinner. Moist, flavorful, and very welcome sustenance to this road weary rounder. The second was when I turned over quad 6s, only to discover they have a $100 bonus for quads (and bonuses for other high hands too).

The bonus was a nice shot in the arm to a stack that had been shrinking and seemed to make the difference in my effort to get back over the break-even mark. When the evening was winding down I was ahead a little more than my bonus amount, so that seemed like a good place to stop until the next time I make it back.

The plan all along on this trip was to finish up at Capitol Casino and play in their 2nd Saturday $220 Deep Stack tournament. This featured monthly event is a longtime Capitol fixture and whenever I can be there on the right day I always want to enter.

After a warm welcome from tournament director Mark Pritchett, I found my seat and play commenced. I slogged my way through the early part of the tournament without anything particularly good happening. At least nothing particularly bad happened either, which can be just as important in a tournament.

When we were down to three tables I had to fold from a tough spot which knocked my stack below average. I made a re-raise all-in from the button with 8-8 only to get snap-called by K-K. Low and behold the miracle 8 came on the river and I was back in the hunt instead of on my way out the door.

A late lunch seemed called for in honor of my survival (suckout) so I had an extremely tasty chicken quesadilla to celebrate and keep my stomach from rumbling.

Somewhere along the way people kept getting knocked out and I built up to a respectable above-average stack. Next thing you know we’re picking seats for the final table.

The blinds and antes took a heavy toll, so that before long I was down to “push or fold” mode. Three successful steals and I had a little room to play again. I called a min-raise from the big blind and flopped a pair of queens. The villain put in the continuation bet and I just called. He bet again when an ace came on the turn. It seemed I could believe he had an ace and fold or go all-in. Calling was no longer an option with the chips I had remaining.

I shoved. He called and turned over A-4 for two pair. Would he have folded to an all-in bet on the flop when he had a pair with an ace? I’m inclined to believe that with his chip stack and a pair he would have made the call heads-up, but maybe I just told myself that to feel better on the drive home.