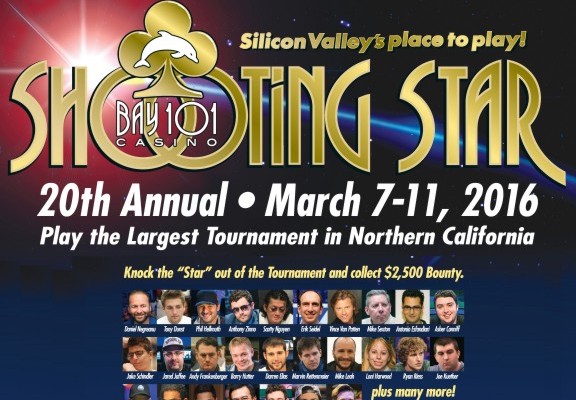 Bay 101 Casino, “Silicon Valley’s Place to Play” will be hosting the 20th Annual Shooting Star Tournament March 7 to March 11. It will remain a $7,500 buy-in and be nationally televised by the World Poker Tour. Over 50 of poker’s elite players and personalities will be “Shooting Stars” this year, knock one of them out of the tournament and receive $2,500 cash.

Win your way into the $7,500 Shooting Star for as little as $130 up to $1,100. Satellites will run daily starting on Monday, February 15th thru Saturday March 5th. See www.bay101.com for a complete schedule of satellites. WPT tour executive and tournament director Matt Savage said, “Bay 101 has the best satellite program in the country which guarantees a great field of both pro and amateur players.”

Last year’s Shooting Star drew 708 players creating a prize pool of over $5,000,000. The top 72 players made the money, with a first place prize of over $1.2 million going to poker pro Taylor Paur.

Bay 101 will also be running a $2,100 no-limit Hold’em tournament on Sunday, March 6. This event is limited to 250 seated players plus 50 alternates and sells out every year. Registration is already open at the main cage 24/7, so be sure to buy your seat early.

Returning this year is also the $25,000 buy-in High Roller event. This event kicks off Wednesday March 9 at 4:00 p.m. and is a two-day event. Last year’s winner was WPT Player of the Year, Anthony Zinno.