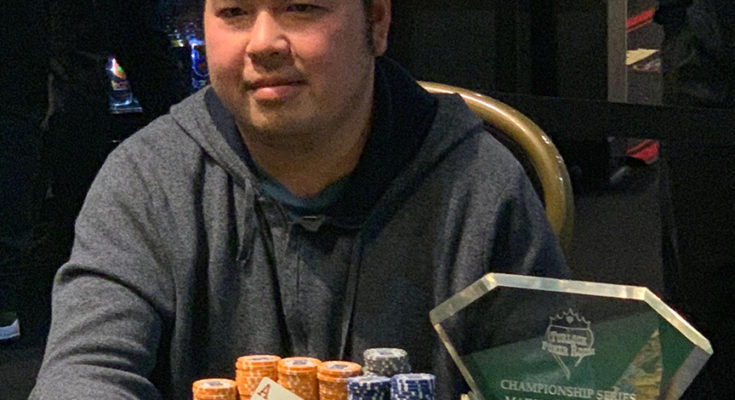 In November, Thu Tran was in the Turlock area from Biloxi, Miss. visiting his parents when he heard about a big poker tournament at Turlock Poker Room. He entered the Main Event of their Semi-Annual Championship Series and a couple days later stood alone as the champion.

Fatigue was setting in when they got down to three-handed with Tran as the massive chip leader. A deal was arranged that netted Tran $19,000 and the trophy, Jessica Berryhill $13,171, and Jimmy Alvarez $13,170.

It wasn’t all smooth sailing for Tran who said, “I was down to like six big blinds on the first day and I ran into some lucky spots I guess. The structure had a lot of play. I loved it. This is actually my first time playing in this room!”

The other big winner was Leslie Hartman, a TPR regular. She was named Series Champion on the strength of her finishes of first, second and fourth in three of the 11 events. She received six months of free tournament entries at Turlock Poker Room, a trophy, and TPR swag including a travel bag, backpack and sweatshirt. A banner with her picture will also hang in the poker room until the next series champion is crowned.

It was a narrow victory, as Shayne Heine needed to finish only one spot higher in the Main Event to steal the title.

“It’s pretty awesome,” Hartman said. “I could use some free tournaments! This is a great place to play. It’s close to home and I love it here.”

Event 2, $150 Hold’em, ended in a three-way chop by Shayne Heine, Oscar Gaeta, and Damion Underwood ($1,480 each), followed by Leslie Hartman and Sam Gorgees.

The $200 Hold’em Event 3 and $3,037 was claimed by Joseph Dudek, followed by Leslie Hartman, Junior Merafuentes, Vincent Chung, and Nabil Esho.

Event 4 was another $150 Hold’em with bounties. This one finished in a three-way deal between Mark Johnson, Patrick Stump, and Nabil Esho ($1,763). They were followed by Ricardo Garcia and George Varda.

Event 6 was a $40 All-in or Fold affair with Leslie Hartman coming out on top ($529). Next were Johnny Vargas, Shayne Heine, Larry Hoover, and Vincent Filipinas.

Event 7, $125 Hold’em with bounties, was won by Miguel Lopez who received $2,108. Others in the top five were Joseph Dudek, Ben Silva, Andrew Villegas, and Shayne Heine.

Event 8 was $125 Omaha Eight-or-Better. Originally scheduled to pay five spots (47 entries), the nine who made the final table agreed to an even chop because registration was about to close for the next event.

Event 9 was the $115 50/50 bounty tournament, won by Tim Weimar and Kenny Kajioka after a chop for $1,156 each. Nabil Esho, Christopher Stevens, and Derl Smith also made the top five.

Next to last was Event 10, Mexican Poker for $230. The top two spots went to brothers Jose and David Covarrubias who each received $2,248. Next came Juan Espinosa, followed by Alejandro Valencia and Irais Garcia.