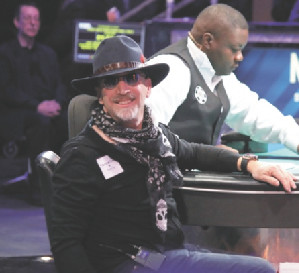 When the World Series of Poker’s November Nine sat down on Nov. 8, 2015 to finish the tournament they started back in July, San Francisco’s Neil Blumenfield was third in chips. Despite the inevitable ups and downs of tournament poker that was also where he finished—third—taking home $3,398,298.

At a table dominated by young pros the 61-year-old Blumenfield more than held his own, displaying an improved game with subtleties and moves he might not have had in his arsenal back in July. He referred to it as the experience of a lifetime.

“It was absolutely spectacular. It was more than I expected. It was incredibly cool,” he told The Cardroom a few weeks later when he had time to let it settle in. “I had a tremendous, tremendous rail there. I had some very old friends who I’ve known for 50 years. I had friends there who I’d known for five weeks. I had a big group of guys from Silicon Valley also. About 15 of them came. There were a few people from just local Bay Area, Reno, Sacramento … card players that I’d played with; Pascale [his girlfriend] of course, and her family. Her son came from Hong Kong, her daughter came from Paris.

“It was just a real treat to be with all those people and then the experience of the final table itself was just unreal. Just spectacular.”

When asked if he was pleased with his overall performance he said he was with the first night (Sunday) but had some reservations about some hands and how he played them the next two nights.

“Sunday night actually played pretty much according to plan. You know, between July and November I did a whole lot of work on my game. Amir Lehavot was my coach. We spent probably 300 hours together over about 2-1/2 months. Then we added in a bunch of other guys to do sims, guys like Matt Stout and Tom Marchese and Ryan Welch, Brent Hanks, James Carroll, Justin Young, Brandon Meyers, Ben Palmer, Mike Benvenuti. We put together this absolutely incredible simulation group and a lot of what we focused on was picking spots to three-bet and four-bet where we thought it would get through, just based on the reputation I had coming in and based on the read of the table and table dynamics and that absolutely went to plan on Sunday night.

“‘Monday night, a little less so. You know, obviously getting down to the final three and being second in chips going into the final three was good, but I didn’t think I played nearly as well Monday as I did on Sunday, and Tuesday was not good. I was very disappointed in Tuesday. I think I pretty much gave away second place which was, you know, it was a lot of money.”

Three hands in particular he fretted over. One where he three-bet eventual champion and massive chip leader Joe McKeehen holding weak cards in a blind-vs.-blind situation and got called. When McKeehen flopped top pair Blumenfield had little chance of winning that hand.

The second hand was against second place finisher Josh Beckley who had raised the blinds preflop. After Blumenfield re-raised, Beckley four-bet shoved and, the two of them having relatively equal stacks, Blumenfield’s hand wasn’t strong enough to call.

The third was the hand that eliminated Blumenfield. “The shove with the deuces when I had no fold equity wasn’t so great. With Josh opening and Joe three-betting, I mean, for one thing, I could get lucky. If I fold and Josh should go all-in and Joe calls and wins, then I have second place. It gives me an opportunity to let them play and that’s always a good thing for me as long as Joe wins the hand.

“That would have been better. The real problem was that Joe had an automatic call with any two cards, and the very best case for me was a coin flip because I had just no fold equity, so I think laying it down was definitely the best play there.”

He had nothing but praise for his competition, especially McKeehen. “Joe played absolutely spectacular poker. I don’t know if he made any mistakes. He made no major mistakes for three days. In retrospect, we were all kind of playing for second place. If he would have hit some adversity on Sunday night, it may have been a different tournament totally. But the fact that he just continued to chip up pretty much constantly … I think he lost two significant pots in three days.

“While there’s some regret that I feel like I left a million dollars on the table—and it’s not often that you get the chance to win an extra million by moving up a spot—overall, you cannot be disappointed with the outcome. It was a spectacular run. I had a great, great time. If you would have asked me if I would have taken third back in July I would have said without hesitation that I would. The end result was very good and I’m happy with the preparation work that we did. Amir was just an amazing, amazing coach.”

When asked about his support from NorCal during the final table he said that he kept in touch with many of the folks back home. “Yeah, I was tweeting the whole time and then had a couple of messaging groups that I kept in communication with and, of course, people saw what was going on on TV, and just over social media, I got incredible support. Not only from people that I knew pretty well and played with, but from other people in the Bay Area that I don’t know very well or don’t know at all who were showing a lot of support and that was really nice. It made the whole experience much, much better.”

When asked what the future held he responded, “The next tournaments are going to be in Florida, so I’m partially living in Florida now. I’ve been renting a place in Ft. Lauderdale since September and I actually am about to close on a house there. I’m going back to Florida on the 10th and there’s a tournament at Seminole Hard Rock that I’m going to play. One of my coaches, Matt Stout, invited me to play in a charity event that he’s putting on at the Borgata end of January, so I’m going to go for that.

“Then I’ll play the Main Event at the Borgata as well. That’s kind of what’s on the docket for now and I don’t know if there’s anything between. There might be a tournament in L.A. The next one that I’m sure about is Shooting Stars, of course, in March. I’m there every year. No reason to change that plan this year.”