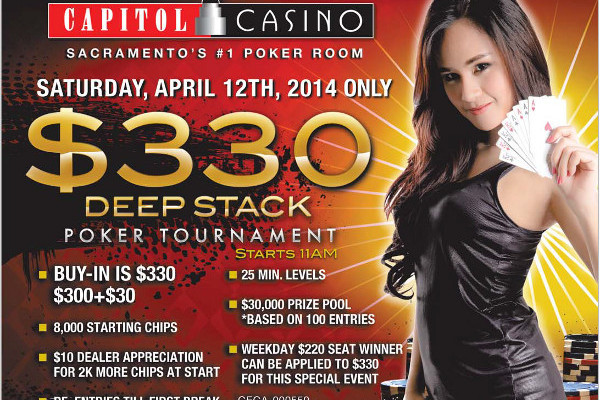 With the prize pools in the region growing more and more these days, Capitol Casino has decided to hold a $330 Deep Stack event on April 12. Tournament players in the area are becoming accustomed to larger prize pools so Capitol decided to give them what they want.

With the existing $220 Deep Stack tournament they hold every second Saturday of the month pulling in over 100 players on a regular basis, they opted to slightly increase April’s buy-in to give players a chance to compete for some really nice cash.

Capitol Casino will continue to offer the $220 Second Saturday seat (which is added by the casino) for the winner of their weekday tournaments. This money can be applied to April’s $330 event or weekday winners can opt to roll it over until the May $220 event.

During the week, Capitol’s tournaments have been “off the charts” often fielding as many as 100 players. The prize pool for these tournaments has regularly been over $4,000 with the winner also receiving a $220 entry for the Second Saturday event.

Weekend Tournaments are as popular as ever. Sundays feature a $5K guaranteed prize pool event for a $120 buy-in. The pool for this event often exceeds $10,000. Every third Saturday they offer a bounty tournament with a $150 buy-in, plus bounties of $50 every time you knock someone out. This tournament has been a great success.

The Hold’em and Omaha action at Capitol Casino is some of the best in the area. With their wide selection of games they have something for everyone. On the poker side they offer a variety of both limit and no-limit Texas Hold’em—$4/8 and $8/16 limit as well as $1/3 and $2/5 no-limit daily. Many people like the action of the $4/8 Omaha game which runs nonstop and $8/16 Omaha on Mondays for those choosing to play for larger stakes.

Capitol Casino has table games including Blackjack, Pai-Gow Poker and tiles, and many tables of EZ Baccarat in the Dragon Room.

Be sure to catch your favorite NBA team on one of their many HDTVs with the NBA league pass.

If you have not tried the food at Capitol Casino you are missing out. Breakfast starts as early as 6:30 a.m. and is available all day. They offer an American and Asian menu that is available until 3:30 a.m. that appeals to those of you preferring a late night dinner.

For more information on tournament schedule, promotions, and all other events please visit their website at www.capitol-casino.com or phone 916-446-0700 and speak to a floor manager.

Previous PostNew, unique games are the attraction at the 500 Club Next PostLivermore Casino wants to make you a millionaire