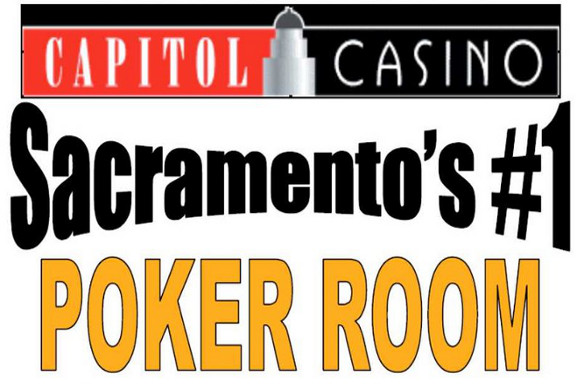 Once again the Second Saturday $220 Deep Stack no-limit Hold’em tournament was a hit at Capitol Casino. Fielding a total of 96 entries the prize pool totaled $19,200 for this monthly event. At the end of more than eight hours of play they were down to the final three when a chop was agreed upon.

The three tough Sacramento area players were led by Richard D. (Duff) who, after being down to 2,500 chips late in the game, went on a mad rush to chip up and take a commanding lead. He received $4,225 with Jim C. taking $4,050 and Charles rounded out the chop receiving $3,500.

With the success of the Deep Stack event on the second Saturday of every month, Capitol Casino decided it was time to make other tournaments on the weekends more attractive to the customer. They added a Bounty Tournament on the third Saturday with a $150 buy-in and $50 bounties. The feedback on the bounty tournament has been very positive, with some players pulling in as many as six or seven bounties and there’s still enough left on the back end for a very lucrative prize pool.

Every Sunday Capitol Casino holds a $5k guaranteed prize pool tournament with a $120 buy-in. Many come in to watch all the NFL football games on one or more of their many HDTVs located throughout the playing area while they are playing tournament poker for a nice prize pool.

Capitol Casino is an excellent choice to play poker during primetime NFL games on Sunday, Monday, and Thursday night, with $100 high hand bonuses per quarter of these select games.

The $2/5 blind no-limit game is back stronger than ever at Capitol Casino. They often spread up to three of these action games which often have monster-sized pots. The $1/3 no-limit is an attractive game as well, with two to three games running most of the time.

Limit Hold’em is always going strong with $4/8 and $8/16 daily and $15/30 on Thursdays. Many people like the action of the $4/8 Omaha, which runs nonstop at Capitol Casino, plus they feature $8/16 Omaha on Mondays for those choosing to play for pots that are off the charts.

The food alone is always a great reason to visit Capitol Casino as they offer an American as well as Asian menu to appeal to many different tastes. The evening Asian menu is available until 3:30 a.m. daily to satisfy the night owls of the area.

For more information on tournament schedule, promotions, and all other events please visit their website at www.capitol-casino.com or phone 916-446-0700 and speak to a floor manager.