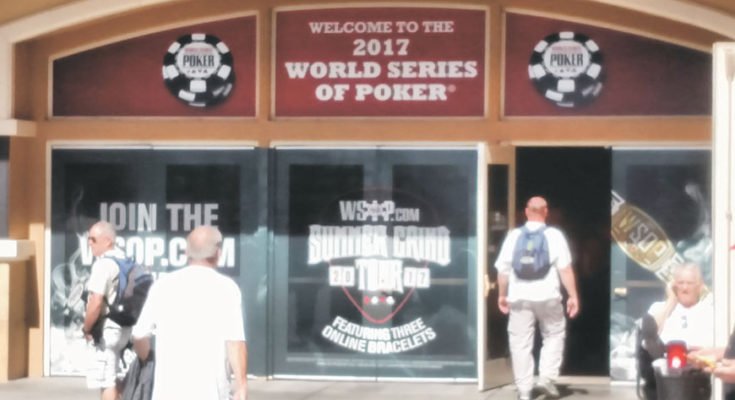 Chasing after the big money & fame

It is World Series of Poker time, which means that in addition to the usual opportunities to score big playing tournament poker, the Rio Hotel & Casino in Las Vegas has 74 extra chances to chase the prestige and cash that come with a major victory.

Not all WSOP bracelets are created equal however, the cash prize depends on the buy-in and size of the field.

Other buy-ins are mostly in the $1,000 to $5,000 range with some of the fields several thousand players large. First place prize money might be less than $100,000 for some, but will go as high as several million dollars in others.

But whether that big victory comes with a life-changing payday or just a handsome sum to add to your bankroll, the one thing they all have in common is the gold bracelet and the title and status that come with being a World Series champion.

In interviews with contenders at big events, many say the title is more important to them than the money, whether it’s the WSOP, World Poker Tour, or another major event. Sure, the publicity, notoriety, and personal satisfaction of being the champion are not to be dismissed, but the money is no small part of the motivation to succeed.

What happens then, when that success finally comes your way? What do you do next if you have the skill and good fortune to navigate through a field of several thousand players and lay claim to the trophy/bracelet/ring and the big money?

There are, of course, no right answers to these questions. The responses to sudden fame and fortune will be as varied as the individuals involved. But would you rather be the guy who uses his newfound glory to help promote the game that made it possible, or the one who hides from the spotlight, deflecting as much attention as possible?

Financially, you may use the money to take care of personal obligations, charitable inclinations, or bankroll solidification. All are solid choices and some sort of mix of all three options (and more) would probably be the most common answer.

I thought of all these things as I was on my way to Las Vegas to take my annual shot at a WSOP bracelet event. Since I’d had some success in the Seniors Championship before (three cashes my first three years—not a whiff since) I decided to give it another go. First place paid over half a million dollars last year, so I let myself dream about being a “big time” ambassador and philanthropist for a while.

This year there were 5,389 entries in the Seniors No-Limit Hold’em Championship, with a prize pool of nearly $5 million and a first place prize of $617,303, but that sort of thinking needed to be shut down long before play began as I focused on the task at hand.

While the levels are one hour long in this event and the structure is as generous and full of play as you could possibly hope for, you still only get 5,000 chips to start. That means that within the first few hours you need to start building up your chips. It also means that a few bad hands can quickly put you behind the eight ball.

Unfortunately for me the latter is what happened this year as I lost about half my chips during round two when my flopped two pair lost to a backdoor flush. I managed to play the short stack well enough to survive for the next couple of hours, but a few missed hands had me so short that I was down to shove or fold. When the shove came, I got shoved out to the rail.

There will be plenty more opportunities for fame and riches, but your humble Ambassador will have to stick to events closer to home until next year’s stab at a WSOP bracelet.

Either that, or keep buying those lottery tickets … nah … that’s just not the same thing at all. You might get the money, but where’s the glory in that?