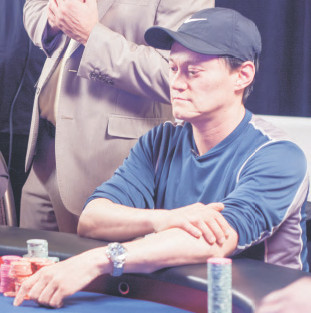 The CardroomNov 10, 2014HPT, November/December 2014Comments Off on Christman takes HPT at Thunder Valley

Joseph Christ­man made the trip west from Pacifica and lived the dream of many poker players on Sept. 29 at Thunder Valley Casino Resort. With 16 cameras capturing his every move, he led the way from start to finish at a nationally televised final table. Under the bright lights on the Heartland Poker Tour set, Christman earned a championship title worth $165,130.

It took him just 29 hands to dispose of his final opponent, Auburn’s Jon Des Pois. The last hand saw Christman call a river bluff from Des Pois to win all the chips with a pair of queens. 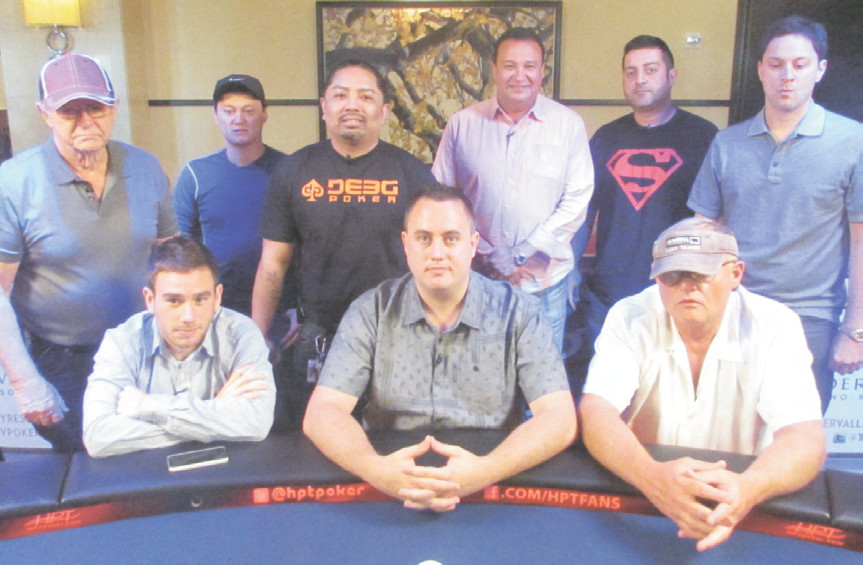 The final table at the Heartland Poker Tour’s Main Event at Thunder Valley.

A six-figure payday for the runner-up took the sting out of narrowly missing the title. “I’m tickled to death,” Des Pois said of his $101,888 payday, having made his way to the Final Table on a minimal investment of just $300.
Sacramento’s Erle Mankin had lots of support from his virtual rail of Twitter followers. The social media site was chirping all day with well wishes for the colorful real estate investor. His fans were able to watch him climb the pay ladder to third place for a score of $66,754. “I like the players that come out…” Mankin said of HPT. “They tend to be regular guys like me.”

Sargon Shiba was the first casualty of the day after he was eliminated on the fifth hand of play. The solutions architect from Cupertino was unable to catch up to Alex Greenblatt’s pocket aces and made the early exit in ninth place for $15,459.

Greenblatt was one of the more recognizable faces at the final table. The Atherton resident has made a name for himself with HPT, earning more than a quarter of a million dollars with the tour in the last 13 months. Greenblatt started off well by knocking out Shiba early, but a coveted title remains elusive. The pro player found himself in a classic race for his tournament life, holding pocket fours to Christman’s A-K. A king on the flop meant Christ­man’s hand would prevail and Greenblatt was out in fifth place. He took home $34,431 for a weekend’s worth of work.
Greenblatt wasn’t the only player at the final table representing Atherton. Archie Snider also calls the small Northern California town home. Snider came into the day with the shortest stack and was never able to amass any chips. The semi-retired real estate developer’s A-K came out on the wrong end of a race with Mankin’s pocket jacks. Snider was sent to the rail with $18,872 for his eighth-place finish.

Haroun “Chino” Dalaig of San Francisco is a full-time student, United States Air Force veteran, and now fourth-place HPT finisher. He picked up $46,377 for tuition, to spoil his daughter, and to play in more HPT events.
Immigration lawyer Jeff Griffiths com­pares his career to his approach at the poker table. “It’s kind of your job to extract information, so I guess that helps out a little bit,” said the San Francisco man. Griffiths lasted 35 hands before he was ousted in seventh place by Christman. He took home $23,118 for his efforts.

Seven hands after Griffiths was eliminated, Abrahim Aboukhalil saw his day come to a close at the hands of Mankin. The Hillsborough native plans to use part of his winnings for an early birthday celebration. He has a party budget of $26,702 after a sixth-place finish.

“I wish it was here every week,” the new champ said of HPT.