Home Back Issue Highlights Come on in, the water is just fine! 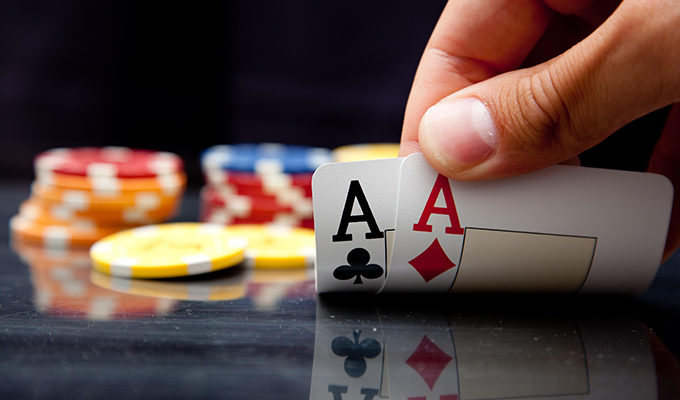 Come on in, the water is just fine!

Vincent OlmosJul 18, 2018Back Issue Highlights, Guest Blogger, July/August 2018Comments Off on Come on in, the water is just fine!

Limit Hold’em is a heck of a game. It’s amazing how polarized people are between loving and hating it. Many would rather jump off a cliff than buy in, while countless others create a huge demand for it! I find the disparity hilarious.

The most common complaint from the haters is “people never fold.” While this may often be true, it is a large reason why limit must be thought of as an entirely separate game from no-limit. The purpose of this article is to highlight what can be learned from playing limit Hold’em.

Solid limit poker theory can lay blueprints for anyone’s general strategy. John Lennon once said, “I’m an artist, and if you give me a tuba, I’ll bring you something out of it.” The same could be said for poker players; limit Hold’em is the tuba. It is unwieldy, obtuse, seemingly nonsensical, and less complex than no-limit Hold’em. However, a good poker player can still make it sing. There are still positive expected value plays to be made. As a side note, skills learned in limit Hold’em may help your no-limit game.

For many, the intrinsic appeal of limit poker is that they “cannot go bust in one hand.” Most bets and raises represent a small portion of their individual stack. Frequent small bets cumulatively can swell pots to obscene sizes. Therein lies the dream—maximum payoff for a minimum investment. While this ambition is good for cardroom businesses, it’s not exactly the true nature of limit poker profitability. Fundamentals suggest otherwise.

If you’ve ever struggled counting a pot then … bam! Limit Hold’em to the rescue. What could be easier than counting the number of consistent sized bets and raises? Practice with counting the number of players in the hand and go from there. It’s surprising how simple it is to calculate to within one bet of the pot size. Once that skill is learned, it becomes an almost innate skill that happens in the background. Learning the fundamentals to pot size is imperative to understanding direct pot odds.

Solid postflop play is a skill that any good poker player needs at their disposal. All good postflop analysis truly starts before the flop. However, limit Hold’em provides a wonderful opportunity to read people based on their flop play. Especially at lower stakes games, defining players’ unique ranges can be cake. The same situations with the same players will happen over and over. Your job is to observe and play them in a way that is profitable. Variables included, try to make the correct choice each time it occurs.

For example: You know that Benjamin defends all of his blinds. You also know that Benny boy always check calls 100 percent of flops, then check raises any pair on the turn. He will just call any draws on the turn. Ben has made himself very easy to play against. In this case, you can play very exploitatively against him. Betting and raising your turn for value and getting free cards with your trash.

Some location-based games have a minimum raising criteria. I’ve played in limit games where players are ridiculed if they open raise with jacks. The hive mind’s reason? “Jacks always lose.” Conversely, these same games feature players that will call suited cards for any number of bets and never bluff flushes. You can use all of that info to your advantage and it makes your decisions easier on future streets. Anytime your opponent has a “never” in a certain spot, that’s a win.

The most consistent thing you may see when observing people’s patterns: how inconsistent they really are. The average poker player will try to play tight for a round or maybe even two. But after that, 6-9 of spades looks pretty sweet for cold calling a three bet from out of position. In limit poker, there is a false perception that this is okay. It will cost you less in a void, but you will be paying to draw to inferior pairs and gutshots much more often.

While these examples seems simple, you’ll find a plethora of info like this. With study you’ll be dancing the limit poker cotillion—raising thinly for value, folding the second nuts effortlessly, and check calling to punish the high frequency bluffers. Limit Hold’em is a game of pushing small edges consistently. If you can make more money than someone else in the same spot, you’re a winner. Learning these fundamentals make you better than your opponents.

Playing multiway pots is something that many poker players legitimately fear. It may motivate them to raise to a zillion preflop or blast off on a scare card to “see where they are at” in a no limit game. I won’t go into why this is not profitable, but you can learn how to navigate these dangerous waters in limit games. Multiple people entering pots is the norm. Generally, if you play a pot with less than three players, it’s a miracle.

Conventional wisdom suggests that players play a tighter range after the flop in multiway pots. It is up to you to determine if this is true for the game you’re in. Pay attention! Almost every huge multiway pot in limit poker will end in a showdown. This is your chance to analyze player’s actions on different streets. If Donk Devon likes to bluff at every paired board, you’ll find out when he gets to showdown. If Check Raise Charlie loves to check raise the field with top pair, don’t forget it. If you have to take notes, do so! This is all valuable information.

Partial all-ins can also be tricky if you don’t deal with them often. In limit Hold’em the frequency of side pot action is higher than the average no-limit game. Experience will teach the implications of playing against one or several players for the side pot. Some players will still go nuts with a draw, then lose to the all-in player. Others will only play the nuts and not charge other live players in the hand. Learning the fundamentals of player tendencies can pay dividends later.

While it doesn’t always offer high octane thrills: limit Hold’em can teach fundamentals. A fair amount of decisions can be binary and rather boring. It is not a get-rich-quick game. Rather the focus is more on correct decision making. It has the potential to make you a more well-rounded poker player. Even if you think your fundamentals are extremely sound, I’d say throw your hat in the ring of a limit Hold’em game. You will definitely learn something!