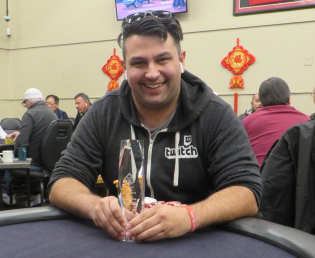 The CardroomMar 19, 2019Casino Updates, March/April 2019, Top StoriesComments Off on Cook is Livermore champion

Cory Cook was the victor at Livermore Casino’s inaugural Players’ Championship. After about five contentious hours of play, Cook claimed the beautiful crystal champion’s trophy along with $5,600 in prize money.

The team at Livermore Casino hosted the event on Feb. 9, and it indeed proved to be a player favorite. There was nearly $14,000 in prize money up for grabs and no entry fee.

Their next Players’ Championship series is now underway and running through May, so they urge you to come on down and qualify. The next Main Event is scheduled for June 9 at Livermore Casino.

With an extensive tournament calendar and larger than expected prize pools for a locals-favorite cardroom, Livermore Casino is the only place to play poker in the Tri-Valley. Boasting the most weekly tournaments in the Bay Area and a hugely popular Players’ Championship every four months, Livermore is a top spot to play tournaments as well as cash games. Keep an eye out for their double points tournaments.

Tournament buy-ins are as little as $45, and every tournament has a first-place guarantee of at least $1,000 (minimum 20 players). Changes are happening regularly, so check out their website for the latest details (livermorecasino.net).

Featuring rebuy, bounty and deep stack structures, the calendar has a little something for every tournament player. Finally, the generous $10 per hour buy-in bonus (two hours maximum) is available to all tournament players interested in taking their winnings to the cash games (or recouping their losses there). Contact the tournament director at 925-447-1702 x205 for more details.

The kitchen at Livermore Casino delivers outstanding fare, including their Friday evening Prime Rib Dinner Special and a $2.99 two egg breakfast. Don’t forget to visit their Sports Bar, which has Happy Hour Monday through Friday from 5 to 7 p.m. All of this in Downtown Livermore—the Tri-Valley’s only poker destination.