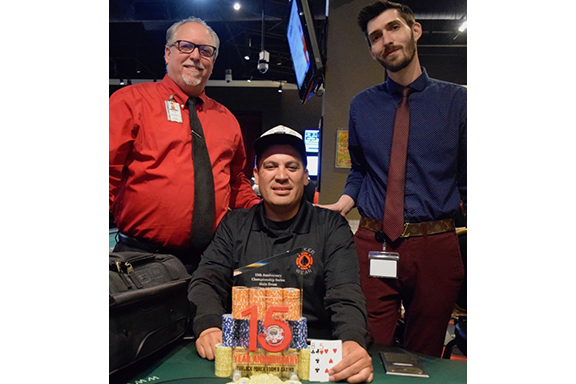 The 15 Year Anniversary Championship Series at Turlock Poker Room & Casino June 6 to 16 spread a total of nine different tournaments. While the $550 Main Event  was the headliner, the big bonus went to the series champion.

They had a hotly contested Day 2 in the Main Event, and when they got down to the final table Jose Esparza had a big chip lead with 1,790,000. He was followed by Nate Bolinger who had 1,196,000. Defending the short stack and hoping to move up the ladder was Juan Ramirez with 113,000.

With five players remaining, Esparza had more than half the chips in play, and when heads-up began with Bolinger his lead was 10-to-1. Ninety minutes later though, Bolinger had dominated the match up and the stacks were virtually even.

They then agreed to chop the remaining prize money evenly. When the chips were counted to determine the “official” winner and assignment of series points, Esparza had a 15,000-chip edge (half a small blind) and was named the Main Event champion.

David Covarrubias was named the Series Champion with 250 points. Second was Federico Ayala (239) with Moore in third (216).

As Series Champion, Covarrubias received a trophy, backpack, a photo shoot to create a banner that will hang in the casino, and one complimentary entry into every Turlock Poker Room tournament from July 1 to Nov. 30.

Winners of the first eight events were: