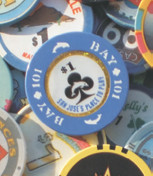 December is never much of a month for traveling, but one fun trip I can always count on is a visit to the “home” casino of our latest Player of the Year. Handing out the trophy is always a treat, especially when the winner turns out to be a genuinely great guy like Larry Odegard, our 2014 champion.

Then again, all of our POYs have been “great guys” in their own right!

I had actually started to wonder though, if anyone would ever unseat Rellie Sigua from that throne. Rellie had led for the whole year and it looked like he was going to go wire-to-wire and make it four times in a row as POY. Barring a miracle run in the last month (November) by one of the other players in the top 10 or 20 spots, the only one with a chance to catch him was Larry.

With four tournaments generating points (TGP) for him in November, which was a little over his average for the year, Larry caught the three-time POY, overtook him, and laid claim to the title.

So I was off to San Jose and the Bay 101 Casino to meet our new Player of the Year and get in a little poker of my own.
I made the drive up the night before because I wanted to be up bright and early to meet with Larry and still have plenty of time after the “official ceremony” to play in their Saturday morning tournament.

Avoiding the fog meant leaving relatively early, which got me to the Bay 101 in plenty of time to play way to many hours of $8/16 and indulge in their triple cheese burger. The food was great, but the poker was horrible. I bought a rack, then half a rack, then another half. Finally I bought one more rack as I wasn’t quite ready to give up and head to the hotel.

Good thing I did because the poker gods finally smiled on my efforts. Within about an hour I had recovered all of my losses from the past several hours, and even cashed out with a bonus rack to pay for most of the next day’s tournament.

I was surprised to find that instead of their usual tournament they were holding one of their first satellites for the Shooting Star. I won’t bore you with the whole bad beat story, but suffice it to say the donkey shouldn’t have called and managed to hit a four-outer on the river.

All I had to look forward to at that point was the drive home, so I stuck around to play some $6/12 until I felt suitably motivated to travel. Unfortunately it turned into a virtual repeat of the night before, without the happy ending. So it goes I guess.

Be sure to check out the article about Larry and the POY contest on page 1. He really did an amazing job over the course of the year with very consistent results, especially for someone who’s been playing tournaments for less than two years.

While you’re at it, be sure to get signed up for the 2015 contest (if you’re not already). Next December I could be coming to hang out with you and putting your picture on the front of The Cardroom!