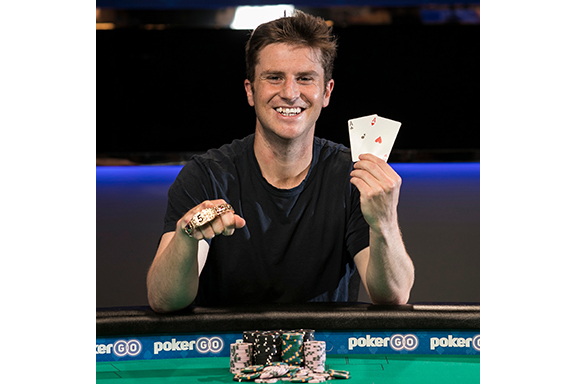 As the 2019 World Series of Poker’s Main Event gets underway (July 3), nearly 70 events have already been completed. Top NorCal players have claimed two of those titles. With 89 tournaments on the schedule this year, more NorCal winners may be on the way.

It was also the first time this format was used in a bracelet event. The deuces, threes, fours, and fives have been removed, changing the odds of making some hands (such as a flush now beats a full house). Players also have to get used to thinking of A-6-7-8-9 as a straight.

That seemed to be no impediment to Epstein, as the pot-limit Omaha cash game player took right to it. He did say that he was able to get in about 15,000 hands of short deck while at a major event in Reno. “I’ve gotten to play tournaments and cash games, enough to get a rough estimate of how the population plays. That seemed to help,” he said.

A downturn in his usual PLO results was the impetus for Epstein entering the event. “I ran so far below [expected value] in PLO this summer, that I decided to play an event with even higher variance than that, thinking that I was just due,” he said.

“I try very hard to table talk and fake talk strategy,” he added. “I think my image is a good one. Not any more unfortunately!”

The final hand came with three players still in the hunt, but Epstein had a sizable lead. First the shortest stack (Anson Tsang) went all-in, then so did the middle stack (Thai Ha). Epstein called to put them both at risk. Tsang had Kc-Jc, Ha Ah-Qd, and Epstein held Js-10s.

The flop was Qc-9c-8s, giving Epstein a made straight, Ha top pair, and Tsang a flush draw. When the turn brought the 8d and the river the As, Epstein had his victory, the gold bracelet, and first-place money.

Baron’s first place cash netted $407,739, the largest of his career. It was his 28th time cashing at the WSOP, lifting his earnings total over $1.5 million.

“I’m feeling pretty good,” Baron said soon after the win. “It’s been a long time coming to get this first bracelet. I’ve wanted it for a while. I’m just glad it was pretty easy today.”

It didn’t necessarily look that easy when the final table of six players began. Baron was third in chips with 7.2 million, and chip leader Ong Dingxiang had 17.8 million. When they were down to four players, the lead had only increased, but Baron was undeterred.

“I was just trying to get to heads-up,” he said. “I knew if I got to heads-up that anything could happen, so when we were four handed, that was kind of what I was thinking—when we get heads up, things can change fast.”

Baron won with A-K against 3-3 to knock out one player, then Dingxiang got the other with A-K vs. A-2. When Baron got the heads-up match he desired, he was looking at a deficit of about 12 million–35 million.

After about 20 heads-up hands, Baron had doubled up, then took the chip lead for the first time. During about 40 more hands the lead bounced back and forth. After falling behind again, Baron doubled up for a huge chip advantage when his A-K dominated A-Q.

When the final hand came Baron held only a slim lead. He looked down at A-A and raised to 800,000. Dingxiang re-raised to 3.2 million and Baron just called.

The flop was 4c-10h-Qs and Dingxiang bet 3.7 million. Baron paused for a bit then made the call. On a 6s turn Dingxiang went all-in and Baron snap called, showing his aces. Dingxiang turned over Qh-Kc for top pair. The 3c on the river was a blank, making Baron the champion.

“When we were heads-up and I had something as strong as aces, I didn’t really want to blow him off [the hand]. I wanted it to happen exactly like it did; he flops top pair, and then I just get all his money.”

Scores of NorCal players have cashed already at the 2019 WSOP, and quite a few have made final tables. Here are the other players who’ve been in the top five of their events so far: