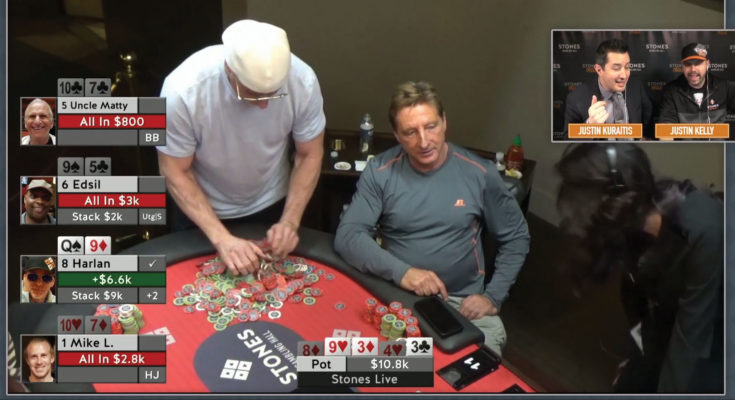 Stones Live Poker on Twitch.tv features local players and special guests playing in live poker games and tournaments from Stones Gambling Hall in Citrus Heights, and anyone can watch on their phone, tablet, or computer.

The experience is a lot like watching any other poker show on TV, except it is live (with a 25-minute delay). The commentators are watching at the same time you are, so their remarks can be reflected right away by viewers wishing to join in the chat option on the screen.

All you need to do is load the Twitch.tv app on your device or go to www.twitch.tv/stoneslivepoker and you can see the action every Monday and Wednesday from 7:00 to 10:00 p.m. They usually play no-limit Hold’em with blinds anywhere from $1/3 to $10/25 (although they have played $50/100 and plan to try a $100/200 limit game). They also spread pot-limit Omaha (PLO) with $5/5 blinds—sometimes Hi, sometimes Hi-Lo.

They also feature final tables from some of their special events, such as their last Sunday of the month $30,000 guarantee tournament. They will also be showing four final tables from their upcoming Stones Fall Classic series Sept. 29 to Oct. 8. Guest commentators for these events will include David Tuchman, Justin Hammer, Jonathan Little, and Annette Obrestad.

Celebrity guests as both commentators and players have long been a staple of Stones Live, featuring personalities such as Chris Moneymaker Lon McEachern, Norman Chad, JC Tran, Kelly Winterhalter, and Bart Hanson.

Kuraitis, who is also Stones Tournament Director/Coordinator and Live Media/Social Media Manager said, “Stones Live is a poker live stream based out of Stones Gambling Hall in Citrus Heights, Calif. We feature live poker action and tournament final tables. Stones Live is hosted with professional commentary and is always run at no charge to the viewers! Our first show was in December 2015 and since then our channel has had over 1.2 million views. With an A-list of special guests and unrivaled poker action, Stones Live is positioning itself as the future of poker live streaming.”

He also mentioned that, during Stones Live games they allow the board to be run up to three times in Hold’em games, and two full boards or a flop followed by three turns and rivers in Omaha games. Rabbit hunting is also allowed to enhance the viewing (and playing) experience.

In one of the wilder hands they streamed recently, Harlan won a $15,000 pot that went like this: It started with a $200 rack attack added by Stones, and the players agreed to also make it a $50 bomb pot (meaning each of the nine players put $50 in the pot and they would go straight to the flop).

On a flop of 8d-9h-3d Edsil bet $500 with 9s-5c and was called by Harlan’s Qs-9d, then over-called by Uncle Matty and Mike L. who both had 10-7. The other five players folded. The turn was the 4h and things went nuts when Edsil went all-in with top pair and was called by Harlan who also had top pair with a better kicker, then both of the open-ended straight hands called, further ballooning the pot.

It was all over but the shouting when the 3c came on the river, giving Harlan the huge pot with two pair (9s and 3s) with a queen kicker.

It’s enough to make you want to watch to see if it always gets that nuts!

The top four players in the Million Dollar Game will choose five mystery envelopes out of twenty, each containing a random card to build their hand. Prizes range in value depending on the hand they make with their cards. For example, draw a straight and win $5,000. Draw a royal flush and win $1,000,000.