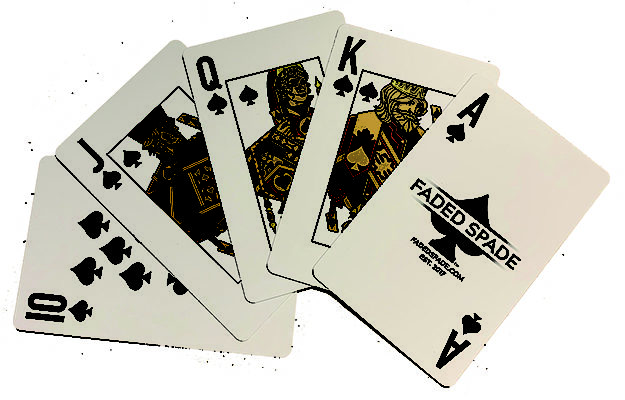 Faded Spade playing cards are set to make their Northern California debut as Bay 101 Casino will become the first California casino customer to offer their product at its poker tables on a full-time basis. They will be used in both tournaments and cash games with the timing closely aligned with the return of Bay 101’s Shooting Star tournament.

“After completing a test run with Faded Spade playing cards at our newly upgraded venue, we received overwhelmingly positive feedback from Bay 101 dealers and players, making the decision to switch to Faded Spade an easy one,” Sam Quinto, Casino Manager at Bay 101 Casino, said. “Faded Spade cards deliver exceptional quality you can truly see and feel at the poker tables, plus provide superior longevity compared to other brands.”

Matt Savage, Executive Director of the WPT and Tournament Director at Bay 101 Casino, added: “As one of California’s premier poker-playing venues, it is necessary that we continue to offer a world-class experience at Bay 101 Casino. Following the opening of Bay 101’s new venue and announcing the return of the Bay 101 Shooting Star tournament, it only made sense for us to continue to elevate our game with Faded Spade.”

Faded Spade was just an idea five years ago, when founder and CEO Tom Wheaton was working a corporate job in addition to being a part-time poker player. He felt that there wasn’t a “true” poker-playing card brand anymore.

He left his corporate job and started Faded Spade about two-and-a-half years ago because, as he said, “From a design standpoint, cards have remained unchanged for decades. Wouldn’t it be nice if there was a poker-playing card for the modern poker era, today’s generation? Could we evolve things like the face cards in a fresh, new way that pays homage to the past but is an evolution for today and the future era?”

In addition to a redesign of the face cards, they also changed the letters, numbers and pips to a size between regular and jumbo. The thickness of the cards was also addressed—too thin and there are security concerns, like ease of marking, as well as longevity problems, too thick and they are not flexible enough, so players and dealers don’t like them.

“We believed that if we partnered with professional players and poker room operators to understand what they were looking for, we could produce a card that had the best of all worlds. And I believe we did,” said Wheaton.

They started as just a consumer brand but soon began partnering with some in the poker industry. First was the World Poker Tour, for whom they developed and began producing their first RFID cards. Soon they were also picked up by Heartland Poker Tour, Poker Go, Run It Up, and others.

After that, with a lot of industry input, they developed cards specifically for everyday use in poker rooms and can be found in casinos like the Aria, Borgata, and now Bay 101. “Bay 101 obviously is what we consider one of the most iconic poker rooms in our country. We’re just happy that they chose us,” said Wheaton.

Previous PostAnniversary series at TPR Next PostMore than poker at local cardrooms!