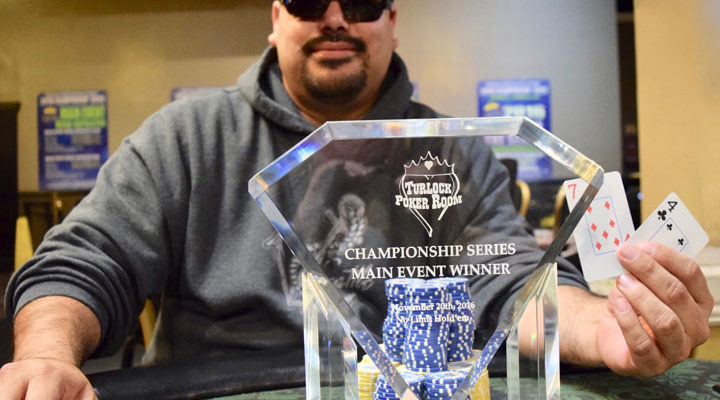 Gonzalez and Peterson agreed to take $20,000 each and leave the remaining $3,144 on the table—along with the Championship trophy—to play heads-up for.

The $550 buy-in Main Event had three starting flights, with more than 100 Main Event seats won into the tournament via satellites that ran for a number of weeks.

Players came from all over northern California to take a shot at the top prize.

The Main Event drew 225 entries for a $109,125 prize pool that paid 28 players. There were a total of 58 players who made it through the three starting flights to come back on Nov. 20 to play down to a winner.

Final Table play began about seven hours after Day 2 cards went in the air. The final table included Erik Matulis and Ed Miller, both with significant final-table results from tournaments throughout Northern California.

Gonzales has had previous success in Turlock, as he took the WPTDeepStacks Turlock Player of the Series title back in May, based on his overall finishes during the full series.

While the WPTDS Player of Series was a solid win, the biggest feature each year of the in-house Championship Series is the huge prize for the Player of the Series.

Players earn points during the Turlock Championship Series for buying in to each of the 10 series tournaments. Bonus points are earned for cashing in any event, with the winner of each event earning the most bonus points.

The player who is top in points at the end of the 10 tournaments earns a trophy, a jacket, a banner of them hanging in the Poker room and one tournament entry for each Turlock Poker Room tournament for one full year—an estimated $25,000 prize if the person was to play every event offered.

Armando Perez won a Hold’em event, won the Mexican Poker event, and cashed in an Omaha tourney as well, securing Player of the Series honors and was the only person to cash in all three Poker genres offered.

Perez held off Tim Weimer and Ken Kajioka for the title, with both Weimer and Kajioka able to keep the sweat going clear into the late levels of the Main Event. Weimer was still alive with two tables left, needing a first or second. He finished 12th and Perez claimed the year’s worth of complimentary tournament entries.