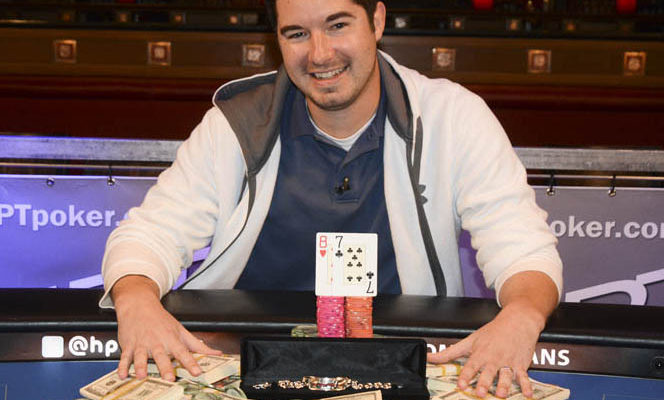 Blair Hinkle turned three solid days of play into a cash of more than $223,000 and the Heartland Poker Tour Season XII Championship at Thunder Valley Resort in October.

The HPT Season Championship was held in California for the first time, and this was only the second time in the 12-year history of the HPT that a $2,500 buy-in was held. The event drew 439 entries and a prize pool just shy of $1 million.

Day 1C saw two third place finishers in the WSOP Main Event— Neil Blumenfield (2015) and Amir Lehavot (2013, when Tran finished fifth) at the same table. Lehavot is Blumenfield’s poker coach, so it was student vs. coach time for a while.

The big field size and hour-long levels meant 178 players returned for Day 2, taking more than eight hours on Day 2 just to reach the money, with 18 players coming back for the final day of play. Close to four hours of play was needed on Day 3 to get to the TV table of nine.

Hinkle began dominating final table play five handed, chipping down opponents, often without playing big pots against them. He kept that same strategy going once he was heads up against Novato’s John Sheehan.

Heads-up play began with Hinkle holding almost a three-to-one chip lead, and while Sheehan occasionally pulled to within two-to-one, he rarely came closer for the first three levels. But stacks eventually evened and one hand made the difference.

Some nine hours after final table play began, Hinkle moved in for 6.8 million and Sheehan called off his 6 million chip stack. Hinkle’s 8-7 outdrew Sheehan’s A-10. Hinkle hit trips against “Johnny Trips” and took the title. Hinkle won the $223,411 top prize and a $3,600 2017 HPT Championship Event package.

Jasthi Kumar, 58th place in this year’s WSOP Main Event and winner of the WPTDeepStacks Main Event at Thunder Valley, took down the Monolith for $60,000, including an HPT Main Event entry.