Home Casino Updates HPT doubles up, returning to Thunder Valley and Club One 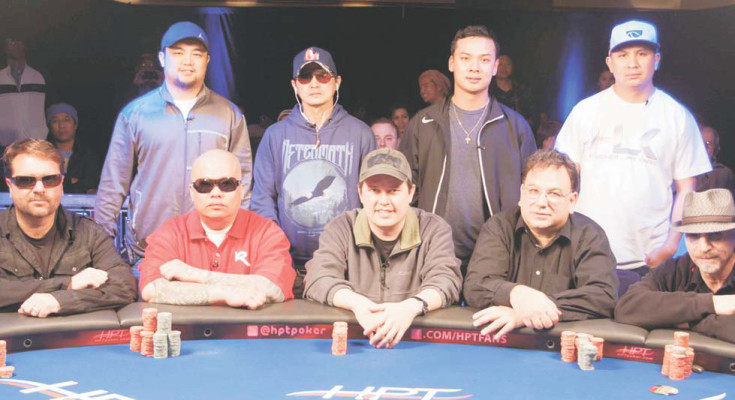 HPT doubles up, returning to Thunder Valley and Club One

The CardroomMar 10, 2014Casino Updates, HPT, March/April 2014Comments Off on HPT doubles up, returning to Thunder Valley and Club One

Runner-up Ed Miller had the lead in the final hand with K-K. A five on the flop for Fernando’s pocket fives ended the tournament. Miller, a 50-year-old car salesman from Granite Bay collected $109,434.”I have been watching (HPT) on TV for the last couple years,” said the champ. “It’s great that they have come to the Sacramento area. It gives someone like me a chance.”

November Niner J.C. Tran found himself back in the spotlight at a TV table on Monday. A Sacramento resident, Tran said, “To me, winning this thing … here at home would mean something special.” After doubling Neil Blumenfield of San Francisco earlier in the day, he needed a double himself to get back into the game. Tran hoped Q-10 would be the hand to do it as he shoved all-in. He met his match against Phuoc Nguyen’s pocket 10s and walked away in eighth place for $19,458. Blumenfield finished fifth receiving $37,749.

When the episodes filmed at Thunder Valley air this spring, Ngoc “Joey” Bui will steal the show. He was the life of the party for most of the day until his A-2 ran into Fernando’s A-K. The 40-year-old from San Jose took home $72,541 for his third-place finish.

The live audience went wild in a dramatic hand perfect for TV. Phuoc Nguyen moved all-in over the top of a previous raise by Fernando. Nguyen held a pair of threes against Fernando’s A-J. The all-diamond flop brought the first bit of excitement with A-J-10. The crowd erupted when the queen of diamonds was dealt next, giving Phuoc Nguyen the flush. Fireworks continued on the river when a jack gave Fernando a full house and eliminated Nguyen. He took home $29,188 for his sixth-place finish.

Ben Sarnoff stretched a short stack as long as he could, finishing in seventh place. Sarnoff got all his chips in holding pocket kings on a 10-7-high board. Unfortunately for him, Miller held a 10 and a 7 for two pair. The 55-year-old lawyer from San Francisco collected $23,739.

It only took two hands for short-stacked Grant Hillman to get eliminated. He moved all-in with A-4, getting called by Blumenfield who had A-J. The bioinformatics manager from Oakland collected $15,567 for ninth place.

HPT is scheduled to have another record year with at least two dozen tournaments. Their newest fan will likely turn up on the tour at least a couple times this year. “$179,000 is a lot of money,” said Fernando. “I will be able to play a lot more tournaments and keep my family happy.” 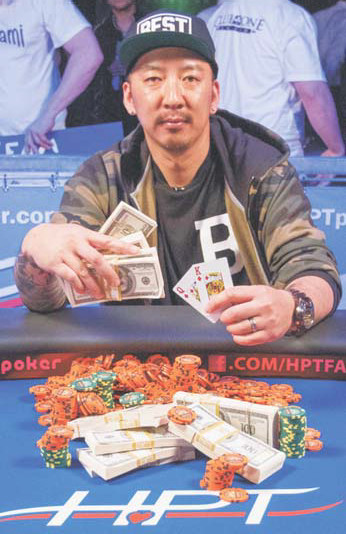 Joe Nguyen of San Jose took first place and $74,754 in the HPT’s Main Event at Fresno’s Club One Casino.

As the HPT wrapped up at Club One Casino in Fresno, telephone repairman Joe Nguyen had just one more opponent to get through on his way to the championship: Club One’s director of business development, Su Kim. She played the event on her home turf and advanced to the final table where she survived four all-in situations, catching a card on the river three of those times.

Nguyen, who had a four- to-one chip lead on Kim heads up, locked up the championship in just two hands. Su Kim’s home field advantage took her to second place for $46,715. Nguyen of San Jose took home $74,754.

Nguyen is no stranger to big-money televised final tables, as he was also last year’s runner up at the WPT Shooting Star at the Bay 101 Casino in San Jose.

The mostly-local final table attracted a lively crowd of supporters who were on their feet until the final hand was dealt. Club One is a fan favorite on the HPT with perks for every player, quality dining, and an accommodating staff. Top finishers on Monday received money clips from Tiffany & Co among other high-end gifts. “Club One Casino has been a great host,” said Dan Evans of Chino who collected $22,411 in fourth place. “Food is good and service is great.”

Normally welcoming of players in her job at Club One, Su Kim showed Prabhakar Thonduru the door. He started the final table with the shortest stack and managed to get an early double. Thon­duru attempted a second double up with K-J to get him back into the game. Kim’s pocket eights ended his tournament life in ninth place for $8,207.

When the episodes filmed at Club One air this spring, viewers will recognize three players from previous HPT broadcasts. Stan Jablonski found himself back in front of the cameras for the fourth time, hoping for his first win. The elusive championship seemed more possible than ever. Jablonski was the chip leader going into Day 2 and maintained the lead for much of the day. He came up short with A-4 against Joe Nguyen’s A-9. Jablonski pick­ed up $14,204 for his sixth-place finish.

Nguyen eliminated another HPT veteran, William Chao, in fifth place. Chao, of El Sobrante has a fourth-place and a tenth-place finish on his HPT resume. He moved all-in with A-10 against Nguyen’s A-K and collected $17,360. “I’m very fortunate to play three HPT events and make it deep in all three,” said Chao, “I was close so many times.”

Triet Nguyen came back to Club One for redemption after becoming the runner-up when HPT last visited Fresno. He moved all-in with A-8 against the pocket kings of Jed Hoffman. Triet Nguyen collected $11,837 in seventh place while Hoffman took his chips to third for $31,565.

Eighth-place finisher Tanya Kirk summed up the popularity of the tour: “You get a lot of good characters playing the HPT,” she said, “I think the cameras and lights are fun.” The money doesn’t hurt either. Kirk took home $9,943.