Home Featured Stories If you don’t like the options, raise! 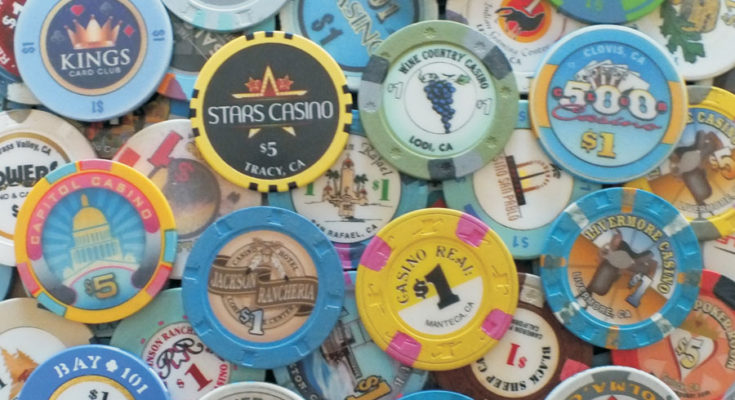 Election time is just around the corner, and I find myself, as I often do, seeing things in terms of a poker analogy. In the whole swirling milieu of the choices to be made, it seems like whichever candidate you settle for it all boils down to the equivalent of hold’em or fold’em.

Wouldn’t it be nice to have a third option if you don’t care for either of the other two? Wait a minute, maybe there is another choice to be made. Oh yeah … raise!

When Stars Casino in Tracy announced that they were having a multiple Day 1 tournament with a $30,000 guarantee I knew I had to make the trip to see for myself how things would go.

Well Mike Sweeney and the folks at Stars hit it out of the park. They met their guarantee with no overlay and kept the place hopping all weekend during the Stellar tournament.

The night before my Day 1, I played in their $1/1/2 no-limit game, had a nice little pizza tableside. I enjoyed the camaraderie and action of a game that often played much bigger than the small blinds would have you assume.

Before we began the next morning I ran into Cheri Svenson, a tournament regular I seem to come across everywhere from the Bay Area to Sacramento. She was really looking forward to having a tournament like this in her backyard, and, with her usual skill and deftness managed to make it to the money, eventually settling for ninth place.

Personally, I was on the tournament roller coaster, which fortunately does have its share of “ups,” but a regrettably equal number of “downs.”

I had been on one of those upswings when I went all-in with 10-10 and was called by a shorter stack with A-7. Win this one and I’m in good shape to make Day 2. Naturally there was an ace on the flop and my stack took a big hit. Then I found myself in that tournament-killer zone of being card dead.

The blinds and antes were starting to take a toll and I couldn’t find a spot to make a move. Finally I was dealt a mediocre ace and it looked like a pocket pair after all the bad hands in a row. I shoved, hoping to pick up the blinds and antes, but was called by a better ace and that was that.

I had a great time sticking around for Day 2 anyway, meeting players and staff, logging several more hours in their no-limit game, and devouring an excellent tri-tip sandwich made on their porch-side barbecue.

Now I’m looking forward to their recently announced Stellar tournament with a $40,000 guarantee!

Media Appreciation Night was the excuse for my business partner Paul and I to head up to Jackson. It wasn’t a poker expedition, but we had a great time meeting up with Cleave from marketing and chatting with Doug Elmets and the gang from Elmets Communications.

Jackson laid out some excellent hors d’oeuvres that were exquisitely tasty along with beer and wine.

They capped the evening off with tickets to the evening show at their amphitheater—Jeff Beck and Buddy Guy. It was an excellent concert at a very nice venue.

The next morning I stopped in at the newly renamed Parkwest Casino Lodi. The name may have changed but the friendly ambience of the place remains the same. I was pleased to meet general manager Brian Bowling, who informed me—among other things—that with a player’s card and a minimum half hour play I was eligible for free food.

They were playing $4/8 which was just fine with me and they had one seat open. That was good, because I didn’t want to wait much more than 30 more minutes for breakfast. The game itself wasn’t going my way, so it was looking like it might turn into an expensive free meal. Not long after I reloaded with a second rack of chips, I managed to lose a hand with aces full (at least I think it was aces full … I almost didn’t turn over the hand because I knew I had lost). Much to my surprise that triggered some kind of mini-mini bad beat and I was awarded another rack!

It was a good thing too, because I ­didn’t want to run out of chips before the food came. It was worth the wait though—eggs, hash browns, and a big sausage sliced and fried. Now I was fueled up and ready to go.

The cards still had other ideas as I kept getting hands you couldn’t even play in a $4/8 game with lots of limping going on. Soon it was time to go, so I picked up what was left of my chips and headed for the cage, at least enjoying the warmth of that tasty “free” meal.

It had been quite a while since I had the opportunity to stop in at Casino Real to play cards and see general manager Dennis Williams. This cardroom was also pretty much the same as on my last visit, but they have since added a very nice, upscale restaurant next door. They still have a lower-priced players’ menu, but you can order much fancier fare either in the ­restaurant or at your table while you play.

They had a $4/8 seat open, so I took that even though I was tempted to switch to Omaha. They also had no-limit Hold’em and a pretty big pot-limit Omaha table in action, but (a) I don’t know the game that well, (b) my bankroll doesn’t bulge quite that much, and (c) when you add a+b you don’t need a c.

The players were a nice combination of retired folks, regulars, and out-of-towners like me. The general tone of the game was what you might call casual/serious. I had a fun visit here in Manteca and my bankroll didn’t take too much of a hit. Next time … the big score comes next time!