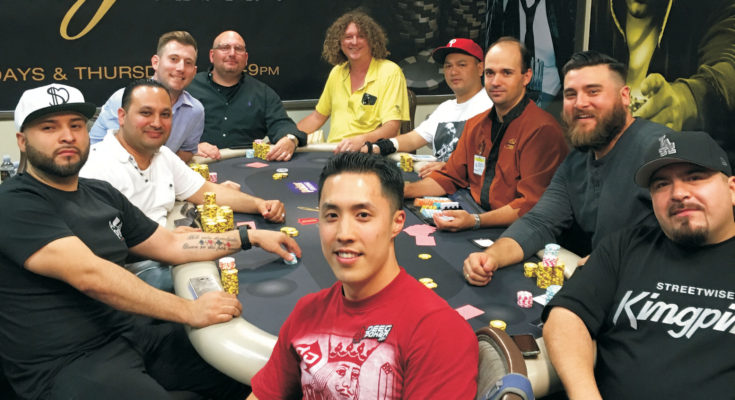 If you don’t already follow me on Instagram, I go by @Cali_Kidddd, and I am quite active on the social media platform when it comes to sharing my poker journey. It allows me to express myself and my passion for poker using visual images (tons of chip stack pics we call #chipporn).

The Instagram poker community has grown in the last two years, and just like on Twitter, several players have linked up and followed each other. It’s a fun way to meet and stay connected with people across the world who share the same interests and goals.

Last week I had the honor of playing in a special episode of Live at the Bike at the Bicycle Casino in Bell Gardens (near downtown Los Angeles) in the first Instagram Special. The lineup consisted of nine Instagram poker players in a $5/5 no-limit Hold’em game which included a $25 per player seven-deuce side bet, and a $10 live straddle.

It turned into an action game with chips flying back and forth across the table. You can view the full episode by visiting www.liveatthebike.com and using promo code “twitch” to get a free one-week subscription.

If you enjoy the show and commentary, I would also suggest subscribing monthly and getting long-term access to their training videos and Poker Talk episodes where they break down specific hands from each episode and discuss strategy. All the commentators are experienced and knowledgeable and unlike many training sites, they review live hands compared to online hands.

Going into this event, I had only previously met two of the other eight players, but I felt as if I had already known these guys for years. They are really a great bunch of guys, and I certainly look forward to the next meet up. The line-up included: Brian (@Bripoker), Oscar (@Oscarmeyerbeanr), myself (@Cali_ Kidddd), Tam (mr._nguyen_ceo), Mark (@pokeragent), Corey (@Hpc_td), Stuart (@smindsrt), Jerry (@tahur702), and Jasper (@jlilflip).

If you are on the gram, these guys are fun to follow and will interact with you if you comment on their pages. Even the live chat room was fun and exciting with several familiar names from the Instagram poker community cheering us on. Thanks for all the support everyone!

Before the night began, we had dinner at the new Bike Brewery, which had great food and service. Brian and Jerry lost credit card roulette and covered our bill (thanks guys).

After that we headed over to the broadcast table where we met commentators Abe Limon and Nichoel Jurgens. Their commentary is usually solid, but it was exceptionally good on this particular night because we sent plenty of drinks up to the booth.

It was a fun session that started off with a $25 bomb pot that Stuart won. With the straddles and the seven-deuce game on, the action was very exciting and this felt just like a home game. If you are not familiar with seven-deuce, it is a game where if someone can win a pot with seven-deuce, everyone at the table has to pay $25. So basically, it is a $200 bonus for scooping a pot! During this episode the seven-deuce was dealt at least five times, which is a lot. Stuart and Mark both won with it, and Oscar got punished (by me) for bluffing over $300 into a $600 pot on a 6-high flop!

If you haven’t tried this game, it is definitely worth trying because it really opens up everyone’s ranges and makes the game less nitty (except for Jerry, who got called “nit of the night”). In his defense, he was pretty card dead, while I got hit by the deck.

Anyways, I’d love to go into specific hand analysis of some of the big hands that were played, but I’m going to hold off and let you all watch the episode first!

Don’t forget to follow me on Instagram (@Cali_Kidddd) and Twitter (@Kylek_ poker) for live cash game pictures and tournament updates! And, if you like any of the poker apparel you see me wearing from DEEG Poker, you can use “KYLE10” as a discount code at www.Deegpoker.com!