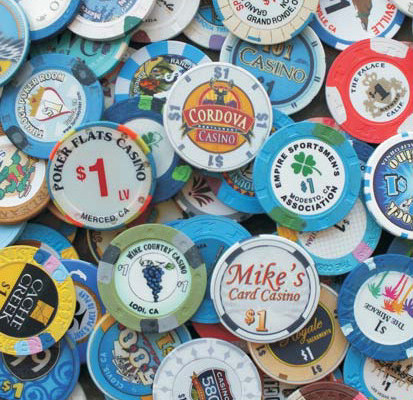 Your humble Ambassador was recently told that in these pages he always reports as a winner. I must beg to differ. It’s just that a lot of the losing rings too much like dreaded bad beat stories, and nobody wants to hear those.

Poker is a game where nobody wins all the time. The trick is winning more often (or at least in greater quantity) than you lose. But bad streaks happen. Even the big name pros you see on TV can go on long tears of running bad, so your Ambassador is certainly not immune.

Of late I’ve been struggling with timing my exits. After a few hours of building stacks I find myself chasing that elusive “one more pot.” The cards take a turn for the worse and before I know it not only my profits are gone but the rest of my chips as well.

Then again, I’ve also been way down and ready to leave, only to have the poker gods smile on my heater as I booked a big win. So it’s easy to look back and say “If only I’d picked up and left when I was at my peak.” Knowing where and when that peak occurs is the tricky part.

On Friday mornings they kick off the action at Poker Flats with a $10 buy-in turbo tournament with re-buys and an add-on. It might not be big stakes but they sure do have a good time. I managed to hang in there pretty well, but eventually went out in eighth place.

By then they had a $3/6 Hold’em game going, so after a short wait I took a seat. (They also play Omaha and spread limit, with different games featured on specific days.) The players and staff were all very friendly as they gladly relieved me of some of my Ambassadorial loot.

The high point was when they went on a food run so I didn’t starve to death. Other than that it was mostly all downhill, with just enough upswings to make me think the cards might turn around. They didn’t, so I gave up the ghost and moved on to my next drubbing. Kudos to Misty and all her staff though for providing an atmosphere where even taking a beating can leave you with a smile.

Mike’s Card Casino, like Poker Flats, is one of the few cardrooms I always seem to miss, so I made it a point to stop in and play this trip. My timing couldn’t have been better as it turns out they just moved into a new home about a month ago and they sure seem to be doing things right.

The new place is open, inviting, well-lit, and welcoming. Manager Kyler Weese left me with the impression that more space, more games, and more fun were on their way in near future, so we’ll be keeping an eye on them as we wish them well.

When I arrived on Friday afternoon they had a radio station broadcasting out front and balloons everywhere as they continue their ongoing grand opening celebration. They had a tournament starting soon, but it had a final day on Sunday so I had to pass on that action. Since I always expect to make the final table I hesitate to enter events that finish on a day I can’t be there.

They had plenty of action at their table games but I took the open seat in $4/8 Omaha High-Low. I started off great and it looked like my luck was changing, but Omaha can be a cruel mistress as I missed draws and watched my flopped nut hands turn to rags. Re-buy.

They were serving free hot dogs, tri-tip, and salads so at least I got fed again as I watched my new friends take possession of my chips. I could have cut and run, but I went for one more buy-in which proved to be a good idea as I reduced the carnage from agony to painful.

They were playing $4/8 limit and $1/2/2 no-limit when I walked into the Empire Sportsmen’s Club and my old pal Vos steered me toward a no-limit seat. This is another super-friendly place to play with nice décor and gracious, helpful staff. Free food is on the agenda here as well, with hot dogs, sandwiches, and salads available for the asking.

This was the stop where I needed a little bell to tell me when to leave. I won some pretty big pots and was way up, only to see it get whittled away to my original buy-in. Then I won a $50 high-hand bonus with a straight flush along with a few more big pots and I was up even more than I had been previously.

Then I got sucked into a really huge pot with a decent hand that had a million outs to the nuts. No guts, no glory I figured as I my chips moved to the other guy’s stack. By this time it was really late (or early, depending on how you want to look at it), and I stubbornly wanted those chips back. Not satisfied with being back to my starting stack I stuck around way too long. This one still haunts me a bit.

The next day I went to the Lodi Cardroom for some $1/3 no-limit. Once again I started off strong, building a good-sized stack, only to see it dwindle, grow again, then disappear. The swings were nowhere near as large as the previous night, but it was still disconcerting to say the least.

The visit wasn’t entirely without its upside though as I ordered what was essentially a beef brisket French dip sandwich which was really quite exceptional. I also made a couple of great new friends.

Two seats to my right was John “Bling Bling” Bettencourt, a well-known poker player from the area famous for the flashy jewelry he wears when playing (it was toned down quite a bit on this humble day). Back in the day he used to own cardroom licenses in three towns in the area and is chock full of great stories from the old days.

Across the table sat Anthony O’Grod­nick, from Cardfather Poker Gear. Anthony is a gregarious, loquacious, and charming young entrepreneur. A real go-getter. I was impressed with the way he promoted his brand, and from what I saw of it he has every right to feel good about what they’re doing. We traded chips a few times and I feel it’s safe to say we both enjoyed the experience. His products look pretty darn good. Check them out at www.cardfatherpokergear.com.

Last stop on this adventure was the Cordova Casino. I’m always impressed walking into this cardroom as it has the look and feel of a hunting lodge with a lot of modern accoutrements to accent the décor.

Not long after arriving we got a $1/3 no-limit game going and it started off pretty tame. The pots were small and the thus the swings in chip stacks were too. As the evening progressed that began to change. Maybe it was the fact that it was UFC night that got things stirred up, but eventually the pots grew as the action heated up.

When the hunger pangs kicked in I opted for the chicken quesadilla. It was big, tasty, and came with a unique and excellent salsa that I can’t adequately describe other than to say it was a delicious complement to the meal.

In the meantime though, I was determined to break the hex of the past couple days. The turning point came when I had pocket kings in early position and made a slightly bigger than average raise to $20 hoping to limit the field. So much for that—I got six callers!

When the flop came nine high and the small blind checked to me I bet about $80 hoping to take it down right there. The next five players folded, but the small blind check-raised all-in to about $200. I’m sitting there with pocket kings and getting three-to-one on a call. What am I going to do, fold? Of course not.

The turn made for a possible straight, but the river was a glorious king. As long as he didn’t go nuts with a straight draw I should be in the catbird seat. He turned over a flopped set of nines and went apoplectic when I showed my rivered set of kings. I felt his pain, but it has happened to us all.

I booked a win in Cordova, so at least I managed to end my adventure on a good note.

Previous PostNorCal POY race off to a quick start Next PostBay 101 Casino: A history & chips