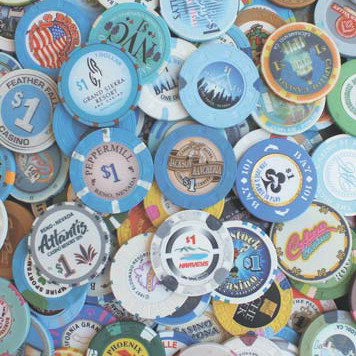 With Stateline, Nev. literally a streetlight away from South Lake Tahoe, Calif. and Reno having grown to virtually touch the border as well, a trip their direction seemed called for in order to make new friends and renew old acquaintances.

Mrs. A and I decided to stop and say “hello” in Jackson on the way to Tahoe. We arrived just in time for theirThursday morning tournament.

There may have been only one table for the $45 + $5, 4,000 chip tournament, but we made up for it having fun with the staff and other players. We also enjoyed being the final two players. I announced “no chop,” and Mrs. A was surprised, then put her game face on. Once the first hand was dealt I shoved all-in without looking, making Mrs. A the champion of the day.

As luck would have it, I was there for the first day they were spreading $2/4 Mexican Poker. Having never played and barely understanding the rules I let them know I was up for a game. It’s basically Five-card Stud, only the deck has a joker … and no eights, nines, or tens. Plus you get to decide whether your next card will be dealt face up or face down by either turning your hole card over or leaving it down.

None of us had any idea of proper strategy, so it was a fair fight. We had plenty of fun playing until it was time to hit the road.

We checked into our very nice and reasonably-priced room at the Montbleu with plenty of time for their tournament. Starting at 7:30 on Thursdays, it has a $40 buy-in, but only 3,000 chips. It was obvious this wasn’t going to take long, so you couldn’t be as patient as you otherwise might.

That became apparent pretty quickly as the regulars were going all-in at the drop of a hat. I got my chips in good which led to the eventual suckout. Mrs. A outlasted me, but overall had a similar experience. Maybe next time!

Mrs. A had brought some work with her on our trip, so I was on my own the next afternoon at Harvey’s, playing in the cash games. After a couple of hours playing $3/6 I looked down to see Ah-Qh, raised, and was called by about five players. When the flop came Kh-Jh-10h I was pretty sure I had this hand won. Even better than the big pot I scooped, they have a royal flush bonus, so the next thing I knew I had an extra $518 in front of me.

When Mrs. A showed up for dinner we headed over to their Hard Rock Café for a nice meal before the 7:00 p.m. Friday tournament. The buy-in was $95 for 4,000 chips and once again I got stacked off relatively early and headed back to $3/6 while Mrs. A made another deep run. She made it to the final table, but just short of the money.

We made the drive up to Reno in time for Grand Sierra’s 11:00 a.m. tournament—$45 buy-in, 8,000 chips. With this many chips I decided I could be a little more selective on which hands to play, but after a few levels I found my stack noticeably shrinking.

I was in shove-or-fold mode and had the big blind when one player raised all-in, another went over the top, followed by still another. I looked down at A-A so there was obviously no choice but to push the chips in. Lo and behold, the aces actually held up against all three hands and I quadrupled up and then some. Before long I was the chip leader and remained so until I found myself heads-up with about a three-to-one lead. Things went well at first, then I lost a few hands so it was about two-to-one.

The cooler hit when my three-of-a-kind (usually golden heads-up) was beat by a full house. Then I was the one all-in with the best hand and a bad beat brought us to a close with yours truly in second place.

With just a a couple of hours of idle time I made a quick stop at Atlantis and played in their $4/8 Omaha Hi-Lo game. Their poker room was packed as they were holding freerolls all day for their regulars.

The highlight of the experience was the hand where, after raising my opponent on the river he said, “I hope you don’t have the straight flush,” as he made I crying call. Of course, I did. Won the pot and had the thrill of spinning their wheel, winning an extra $25.

We stayed at the Peppermill that night and the room was truly wonderful—spacious and beautifully decorated. We started the evening with an exceptional seafood dinner at their Oceano restaurant, located conveniently close to the poker room.

We finished eating just in time for their 6:30 p.m. Saturday tournament ($120 buy-in, 10,000 chips, $40 bounties). Maybe I got too cocky, but I was sure the old veteran across the table didn’t have it. Turns out he did and it was another relatively quick exit for your Ambassador.

While Mrs. A continued to give them what-for, I found a seat at a heads-up Hold’em slot machine I had never seen before. It’s you against the computer with no rake. It was back and forth, but in the end I pummeled that machine pretty good, all the while enjoying some complimentary beer.

Meanwhile, Mrs. A continued her impressive run, taking down a few bounties and eventually chopping two ways (with the old timer who had eliminated me).

We had just enough time the next morning to sneak in a tournament at the Eldorado, as they have a daily $30 tournament at 10:00 a.m. This one was definitely designed to move quickly and, despite doubling up on the second hand, was soon watching my stack dwindle and eventually evaporate completely. At least this time I outlasted Mrs. A!

Previous PostChao wins over $71,000 at Thunder Valley’s Sweet 16 Next PostReciprocity: The key to winning poker