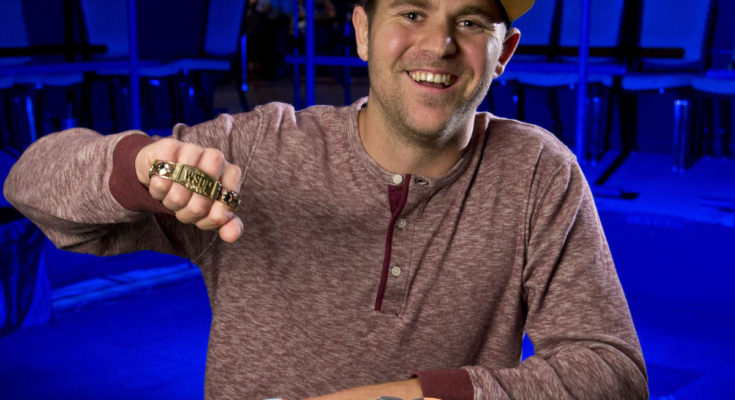 His first bracelet came in 2013 playing the $2,500 buy-in limit Hold’em six-handed event. For his career he now has 33 WSOP cashes and several deep runs to complement his two victories, along with earnings nearing $2 million.

Comparing it to his first victory, Johnson said, “This one feels a lot better, for sure. I just got married and my wife is six months pregnant, so with a kid on the way, this is more special.

“I also had two of my friends make a bet for a significant amount of money that I would win a gold bracelet this year, so they also won a lot of money—so that feels good.”

H.O.R.S.E. is a mixed-games event where players switch between playing Hold’em, Omaha Hi/Low 8-or-better, Razz, Seven Card Stud, and Seven Card Stud Hi/Low 8-or-better. “I started playing H.O.R.S.E. seven years ago because I grew up next to Chip Reese’s sister, and H.O.R.S.E. was always his game. I decided I wanted to be really good at this, so that’s where I focused my energy. This feels good to win a bracelet in a mixed event, for sure,” he said.

When the final table began, Johnson was one of the shorter stacks, but he dominated the final table, which was made up of both seasoned pros and amateurs.

The chip leader was Jared Talarico, but by the time they were heads-up Johnson had built an 11-to-1 chip advantage.  On the final hand, though, his lead was down to about 4-to-1. They were playing Seven Card Stud and Talarico bet on fifth street, Johnson raised, and Talarico’s call put him all-in.

The rest of the cards were dealt and Talarico showed two pair—sixes and fours. When Johnson turned over his river card he exclaimed, “king!” which gave him an ace-high straight to win the hand and the tournament.

“I was the most excited coming into this year that I’ve ever been,” Johnson said. “I’ve been that way each year for the nine years that I’ve come to the WSOP. But I do get more and more excited about it. In the past, I’ve focused a lot on cash games. But this year, I decided to focus on tournaments. So, it’s nice to win a bracelet this early.”

Plenty of other NorCal players have cashed at this year’s WSOP (as usual), including lots of final table appearances. The “Closest to a Bracelet” award goes to Dmitry Savelyev of San Bruno, who came in second place in Event #45: $1,500 Mixed No-Limit Hold’em/Pot-Limit Omaha, good for $149,177.

For a complete listing of all your friends and neighbors from Northern California who have cashed at the WSOP, go to thecardroom-norcal.com/norcal-wsop-results/.

Previous PostWSOP? Yes! But plenty at home too! Next PostMike Sexton shows “Life’s a Gamble”