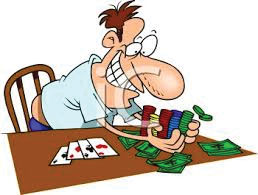 On a recent trip to San Jose, I was “fortunate” enough to have been there when Bay 101 Casino was holding satellites to the Main Event of the Bay 101 Open.

Unfortunately, I barely lasted through three levels of play, which wasn’t surprising since I didn’t win a single hand. None! Twice I flopped two pair and once a set, and all three times the flush draw got there on the river. It was obvious all three times that the other guy had it and I had to fold.

Each time I figured that chips saved would be for the good when the next time came around and I scooped a big pot. It never did. I was down to about 10 big blinds on the button and I had A-K for my best starting hand of the day. A small raise and a bunch of folds had me going for the all-in shove.

I knew I would be called (and I was), figuring I would need to win a coin flip. Sure enough, he had a pair of sixes and it was “off to the races.” The theme of futility continued as I got exactly nothing from the board and was done for.

Trying to get the stink out of my nose and revive my drooping self-esteem, I sat down for some $4/8 to see if I still knew how to win a hand. It only took a couple of rotations, but sure enough, I was stacking chips and feeling much better about myself.

I probably should have left right then, because first I won a few more (and was even briefly ahead), then the game shifted into neutral for me for a while before the transmission conked out completely and I called it a day.

Believe it or not, it was the book review in this issue (“Mastering Mixed Games,” page 1) that got me thinking more about this. With all the low games and split-pot games Dylan Linde described, it occurred to me that maybe, with all the crap hands I keep getting, I should be seeking out games that reward them.

As I continued to stew about that ill-fated satellite, I began to wonder if I was playing out of my league. Maybe all those folks are just too darn good for me to keep up. I know that’s not the case (or at least I prefer not to think so), but when you’ve got the poker blues that’s the kind of thing that comes to mind.

Then I had a brilliant idea. Poker tournaments need a handicap system like golf tournaments. Say you are a touring pro with multiple WSOP victories, then you start with 10,000 chips. If you’re a pro who is scrambling to make ends meet and have no significant victories, then 15,000 for you. Regular Joe’s get 25,000 and, if anyone can decide who they are, the Homer Simpsons of the poker world get 50,000.

Nah, it would never work. First, Homer would undoubtedly do one stupid thing after another and get consistently rewarded for it. The regular Joe’s would then dump their chips to either him or one of the pros. And the pros would commit hara-kiri on the felt when Homer wins after going all-in multiple times with only two outs.

Second, we already have a system in place. It’s called a buy-in. When the dollars go up, the play gets tougher. It’s not similar to a golf handicap but rather more like a tennis rating. If you take on someone who’s a level or two higher than you, then expect a butt whipping. It’s not necessarily a good idea. Then again, maybe you are just looking for an expensive lesson. If so, make sure you learn the lesson. Unless, of course, you’re Homer Simpson.