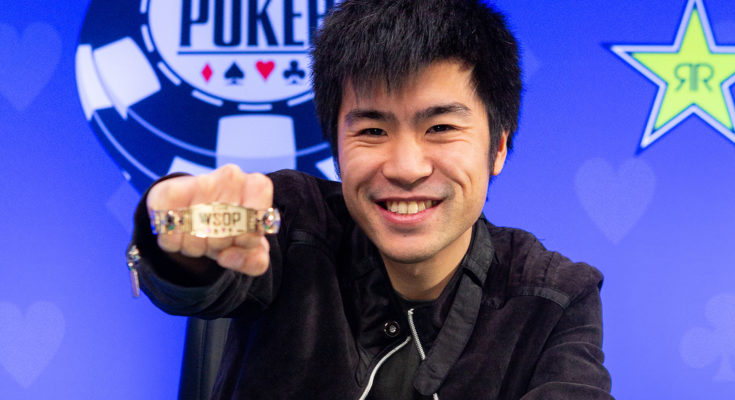 Millbrae poker pro Preston Lee was the last man standing in the 2018 World Series of Poker Event #39: $1,500 No-Limit Hold’em Shootout held June 19 to 21. By beating everyone at his table three times, Lee received his first WSOP bracelet and $236,498.

In the shootout format, a player must beat the other (usually nine) players at his or her table in order to move on. Tables are not eliminated to balance players but rather each table plays until there is a victor.

With 100 tables accommodating 908 entries, one player from each table advanced to the second round. Each of them then sat at one of 10 tables with 10 players each, with the last survivor at each of these tables making up the final table.

This was Lee’s third WSOP cash with the others (in 2011 and 2017) totaling just over $4,000. That’s a long way from a championship bracelet and nearly a quarter of a million dollars.

There was a lot of excitement for Lee and Florida’s Corey Dodd when they got down to heads up. Their battle went on for 131 hands, with Lee in the lead most of the time; however, they both hit three-outers late in the game to stay alive and prolong the contest.

Then on hand 283 Lee shoved with Ks-5s and was called by Dodd holding Kc-10d. Once again, the worst hand won when Lee hit the flop of 5h-Js-8h and held on after seeing Qh and 6h. Once again, they were about even.

Lee then began to build a lead and by hand 300 Dodd was almost down to the felt. On hand 302 Dodd’s last chips were in the pot preflop. Lee had Ks-2d and Dodd held 6c-5c. The board ran out 8s-2c-Qd-3c-4h giving Dodd the straight and a much-needed double up.

All Dodd’s chips were back in the middle preflop on the next hand. This time Lee had 9d-5c and Dodd 8c-3d. The 4d-5h-Kd flop gave Dodd a gutshot straight draw, but the turn was the Kh and the river the As, ending more than 12 hours at the final table and almost four hours playing heads up.

Commenting on the heads up duel Lee said, “It was pretty insane. We got it all in multiple times. He got lucky a few times. Then I got lucky. Then he got lucky. It was back and forth; it was pretty crazy. The plan was just to grind him down, get it in, hopefully win.”

Instead of coming back to the Bay Area, Lee’s big score made him change plans. He said that he will stick around to play more WSOP events this year, including the Main Event.