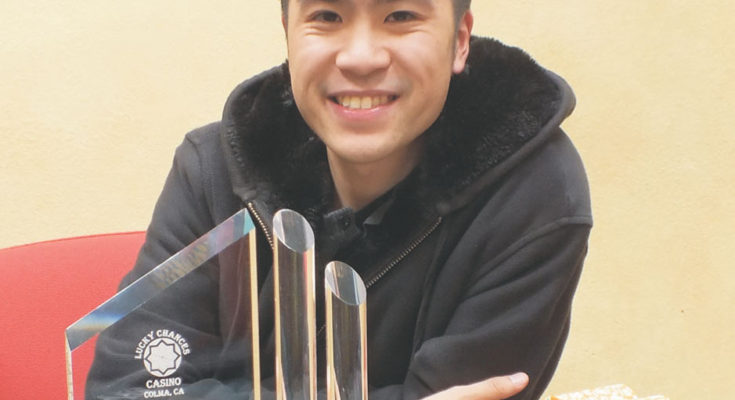 Lee wins Main at Battle of the Bay

Arnold WarnerMay 09, 2017Back Issue Highlights, May/June 2017, Top StoriesComments Off on Lee wins Main at Battle of the Bay

The 19th Annual Battle of the Bay at Lucky Chances Casino in Colma ran from April 23 to May 1. The five events making up the series broke several Lucky Chances records for entries and prize pools, with the Main Event leading the way.

After a long and arduous final table at which the chip lead changed hands several times, two players were left with nearly equal chip stacks and agreed to a chop. Preston Lee from Millbrae claimed $115,290, the trophy and title, while Redwood City’s Greg “Spartacus” Pincombe received second place and $103,170.

Lee started the final table as one of the short stacks but waited patiently for his opportunity to double up, and he did. He continued that approach even after gaining a more playable chip stack, eventually taking down the big pots. “I just kind of won all my flips, and things worked out. This was my biggest [tournament] win,” Lee said after his victory.

Pincombe likewise bided his time well and took advantage of his best chances when they came up. He’s been there before though, having won this event about nine years ago and being part of a chop at the Gold Rush series at Lucky Chances last November. “I’ve been playing here for about 10 years, and these tournaments are probably the best bang for the buck, because they give you 100 grand guarantee for first, which you never see, and they always exceed it,” Pincombe said. “The structure is really good. We started with 25,000 chips and it’s just a really, really well-run tournament.”

Evan Sandberg came in third ($52,370) but had both the best and worst runs at the final table. Starting with a medium stack, it wasn’t long before he was eliminating players and gaining a massive chip lead which he held all the way up to three remaining.

Some tough coolers while playing short handed brought his tournament to a halt though, notably holding A-Q against A-K and then A-J against A-K. Despite it all, he took it pretty well. “It was a really good experience. Overall it went really well,” he said. “When we got down to three handed I had over half the chips in play. So that was pretty disappointing to finish third, but at the end of the day it’s a good result. It’s a really good environment here—really well run.”

The final event before the Main Event was a $200 buy-in turbo tournament with a $10,000 guarantee for first place. A five-way chop brought a first place tie to Daly City’s Rellie Sigua and Newark’s Denzel Suntay who each received $8,000.

Previous PostThanks for the contributions! Next PostTrip tips for the WSOP