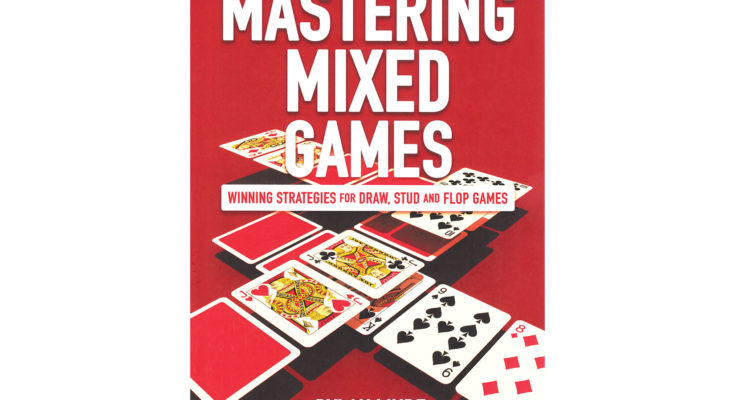 Do you ever find yourself wanting to break out of the rut and the grind of no-limit Hold’em? Sure, the game is like an old friend you would never desert completely, but hanging out with a different crew every now and then keeps life adventuresome.

In his new book “Mastering Mixed Games” (D&B Poker) author and poker pro Dylan Linde looks at 10 poker variants that are commonly found in mixed game formats, which include H.O.R.S.E., Dealer’s Choice, and many others. He provides quick overviews of how each game is played, then offers strategic advice.

In the introduction, Linde (2018 champion at the World Poker Tour’s Five Diamond World Poker Classic) says, “When you cut down to the core, poker games all revolve around the same basic themes: balancing your ranges, considering pot odds, maximizing value using aggression, correct range construction of your opponents, etc.”

He also says, “Moving from one game to another is, at its essence, just learning how to value new ranges in a new game …. Learning a new game and new ways of thinking about your range versus your opponent’s range will inevitably lead to an increase in mental flexibility and new insights in your core game.”

Each of the 10 chapters has an introduction that describes the game being played, looks at opening hands and ranges, then delves into basic and some advanced strategies that are unique to that specific game. Linde closes with quizzes to examine scenarios you might run into and what you might do to maximize your equity.

The games covered and some quick basics are:

Limit Hold’em. Same game as no-limit Hold’em, without the really big bets. Which, of course, makes it a very different game.

Limit Omaha 8-or-Better. Most of us are probably familiar with this one too, as it can be found in many NorCal cardrooms. An Omaha game where the pot is split between the high and low hands.

Pot-limit Omaha 9-or-Better. Same game as the limit version, only players can make bets up to the size of the pot. Which, once again, changes things greatly.

Stud High. Seven-card Stud with the high hand scooping the pot. The game many of us learned first, before the world became aware of Hold’em.

Razz. This is basically Stud Low. The best hand is 5-4-3-2-A and straights and flushes don’t count.

Stud 8-or-Better. Seven-card Stud again, only this time the pot is split between the high and low hands. (Low hand’s biggest card can be no higher than an 8 to qualify.)

Deuce to Seven Triple Draw. This is a Five-card Draw lowball game where you can draw for more cards three times. Hand rankings are exactly opposite of those in a high-only game, so the best hand possible is 2-3-4-5-7. Flushes and straights are bad.

Badugi. Also a triple-draw lowball game, but you are only dealt four cards and try to make the best low, unsuited hand you can. A Badugi is either 4-3-2-A (the best hand) or 5-3-2-A. If there is no Badugi then the best three-card hand (also unsuited) will win.

Badeucy and Badacey. Two similar triple-draw lowball games. Badeucy is a combination of deuce to seven and Badugi, while Badacey combines Badugi with ace to five. They are split pot games with half the pot going to the best five-card low hand and the other half to the best Badugi.

Deuce to Seven No Limit Single Draw. Similar to Triple Draw, but there is only one drawing round and bets are no-limit rather than limit.

Most of us won’t see a lot of these poker variations, except for maybe in a home game or a trip to the World Series of Poker (where 11 of the 73 events in 2019 were mixed games, and many more featured one of these games in its own tournament). However, if you read the book, then seek them out, the world of poker can be so much more colorful than another session of no-limit Hold’em.

“Mastering Mixed Games” is published by D&B Poker (www.dandbpoker.com) and is available through all good retailers.