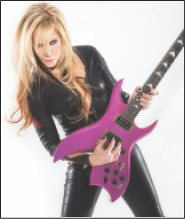 The CardroomMar 12, 2018Entertainment & Dining, March/April 2018Comments Off on Lita Ford

Lita Ford is an English-born American rock guitarist, actress, vocalist and songwriter who was the lead guitarist for the Runaways in the late 1970s before embarking on a solo career in the 1980s.

In 1975 she joined the all-female rock band the Runaways who released their first album in 1976. By 1977 internal conflicts were erupting within the Runaways and the band finally broke up in 1979.

Following the breakup of the Runaways, Ford set about launching a solo career. Her debut solo album, entitled Out for Blood, was released in 1983. She had several more releases before taking a hiatus starting in 1996.

In 2008 Ford re-emerged with a new band, releasing Wicked Wonderland in 2009. In 2012 she released Living Like a Runaway, an album much more in line with her earlier work. The title is also celebratory, as Ford had recently settled differences with her former Runaways’ bandmates.