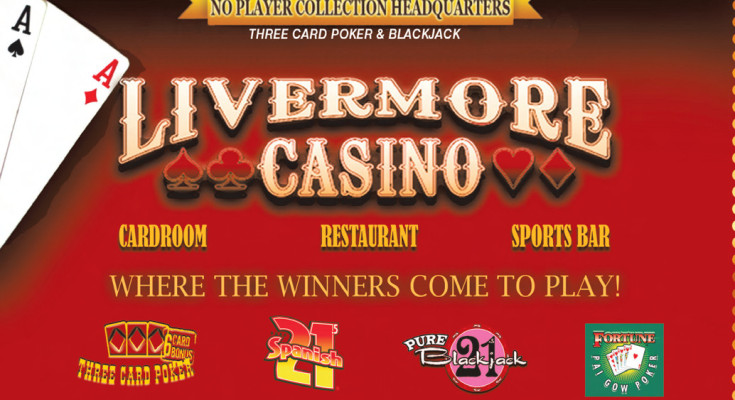 The CardroomNov 10, 2014Casino Updates, November/December 2014Comments Off on Livermore Casino begins Way to the Bay promo

Livermore Casino completed its Race to Tahoe event with a playoff tournament that was held on Saturday, Oct. 18. The 40 qualifiers consisted of the top ten monthly winners from June through September. Each received Livermore Casino logo t-shirts and hats, and were treated to a lunch buffet. The 40 qualifiers played down to the “Final Five.” Cash winnings were also awarded to the players finishing sixth to tenth.

The Final Five winners each received $1,675 for an entry into the WSOP Circuit Ring Event at Harvey’s Resort & Casino in Lake Tahoe, a three-night hotel stay at Harvey’s, plus an additional $500 for spending money. Each package was valued at over $2,500. The WSOP four-day event will begin on Friday, Nov. 7.

Livermore Casino is already underway with The Way to the Bay poker tournament promotion. Qualifying for The Way to the Bay satellite began Oct. 1 and will run through February 2015. The top prize is a $7,500 seat into the 19th Annual WPT Shooting Star held March 2015 at Bay 101 Casino in San Jose. Additional seats into the $2,000 buy-in event will also be awarded.

Beginning Oct. 1 through Feb. 28, play in any of their daily poker tournaments to qualify. (Super Saturday Tournaments do not qualify for points.) To qualify for a chance to play in their Way to the Bay qualifying event, a point system will be in place. The first place winners in their weekly tournaments will receive 100 points, second place 70 points, third place 50 points, fourth place 30 points, and fifth place 10 points.

Sunday mornings you can earn double points. Double points can also be earned the last day of the month, October through February, during the 7:00 p.m. Round-Up tournament. This tournament has a $120 buy-in which includes a $20 bounty chip and a first place guarantee of $1,500.

The top 10 point earners each month will receive a seat into the Way to the Bay playoff tournament to be held at Livermore Casino in March. Each month begins a new qualifying period so everyone has a chance to win a seat.
Livermore Casino has two daily tournaments at 11:00 a.m. and 7:00 p.m. with buy-ins ranging from $45 with a $1,000 first place guarantee to $100 with a $1,200 first place guarantee. They also host other special events featuring double points and larger guarantees .

During the months of November and December bring a non-perishable food item and receive an additional 1,000 in tournament chips (excludes Super Saturday tournament).