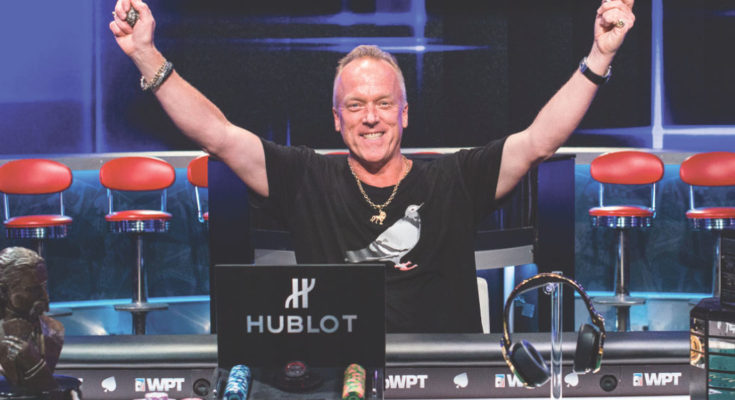 For most poker players, getting barred from the WSOP Main Event would be devastating, but for Hillsborough’s Pat Lyons it proved to be the start of something big, and the last several weeks have gone a long way toward his earning his self-proclaimed “world famous” title.

Denied his shot at the November Nine, Lyons went to the Talking Stick Casino near Phoenix for the Arizona State Poker Championship … and he won. A couple of weeks later he was at the Bicycle Casino in Bell Gardens for the World Poker Tour’s Legends of Poker tournament … and he won.

The tale begins with Lyons going to Las Vegas on June 23 for the World Series, but when he went to register for an event on July 9 he was informed that he had been, as he put it, “kicked off the property.”

He said they barred him because he was abusive to an employee. “I asked ‘what employee? What did I say?’ This all stems from waters, asking for waters, they only wanted to give me four waters at a time through the whole day and I wanted more than that and then they asked me how many do I want and I said like 12, then they said ‘you cannot have 12, you can only have four.’ Then I said ‘then why are you asking me how many I wanted, it’s like you’re [messing] with me.’”

He was planning to play the Seminole Hard Rock tournament in Florida, but decided his back wasn’t up to a cross-country flight. A friend said to him, “Pat, why don’t you go to Arizona. There’s a tournament down there, $1.1 million prize pool with a $1,100 buy-in and it’s much closer.”

He said that when he got to the Talking Stick Casino, “It just felt like I belong there.”

Lyons busted his way through the field, found himself at the final table and soon went on to win the title, trophy, Rolex watch, and $241,000.

Understandably feeling pretty good about himself, he went back home to play in the Bay 101 Open series. He said that on Monday he had his aces cracked, then on Wednesday his A-Q suited lost to Q-6. On Friday the partners event also went poorly, followed by the Main Event on Sunday which had similar results.

So he said, “I’m going to go to L.A. and beat the Legends of Poker. The Giants couldn’t beat the Dodgers, but I can beat L.A. You guys are giving me too many bad beats and I need to get that out of my system.”

Registration for the Legends tournament at The Bike would be closing at noon the next day, which is actually Day 2 of the event. His flight was scheduled to leave San Jose at 9:45 a.m., but the plane sat on the tarmac until about 10:15 due to conditions in Los Angeles. Knowing he might not make it in time, he called tournament director Mo Fathipour who took his player’s number and held a seat for him.

He arrived right at noon, the last player to register. As the WPT cameras rolled he said, “I’m here. I’m late. I can’t believe what I’ve been through, but I’m going to win this tournament. It’s my destiny.”

His day started with 30,000 chips and ended with more than 400,000. He said he finished Day 3 with 2 million and Day 4 with 5 million and was on his way to the final table where he entertained the crowd and took the other players’ chips.

“I started saying ‘Beat L.A.’ and I was buying the crowd drinks. I told them if I get over 10 million chips I’ll buy you guys another round—the whole room. So they were cheering for me. Even though I say, ‘Beat L.A.’ they still love me. I can go into a hostile territory and the whole place is rooting for me.”

He said there are five tournaments he most wants to win: Legends of Poker at The Bike, Los Angeles Poker Classic at Commerce Casino, Bay 101 Shooting Star, WPT Five Diamond Classic at Bellagio, and the WSOP Main Event. He was able to check one of them off the list when his A-8 dominated Ben Zamani’s A-2 for the last hand of the tournament. In addition to the $615,346 first place money, Lyons also received a WPT Champions Trophy, Hublot watch, Monster headphones, entry into the next WPT Tournament of Champions, and gets his name engraved on the WPT Champions Cup with all their other winners from the past 15 seasons.

“They gave me a Wild Bill Hickock trophy that’s so heavy I can’t even lift it with my bad back. And I won the tournament with A-8—Bill Hickock’s hand! This is like divine intervention. I don’t know what’s happening to me, but it’s crazy. I was not gonna be stopped. I am a living legend in the world of poker. I just love the game!”

He also wanted to thank everyone at The Bike for a great time. “Mo Fathipour really takes care of me. He puts on such a nice show, a fine buffet. I love the food down here. The Bicycle Casino is an excellent place. People feel welcome.”

Previous PostIf you don’t like the options, raise! Next PostVayo is 2016 NorCal Nov. Niner