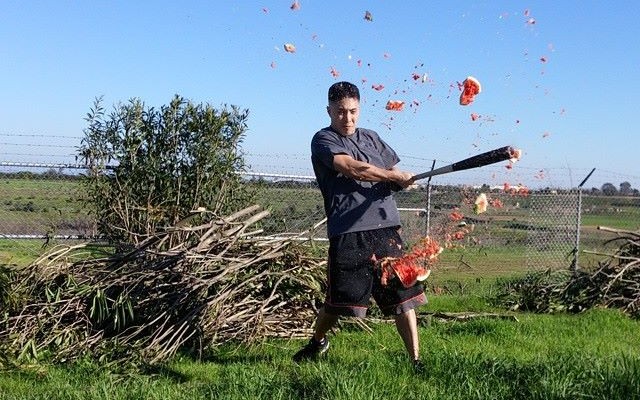 For years, I had no idea how to control my emotions from poker.  The swings in poker can be brutal, and often times what separates a winning player from a losing player is their ability to handle the emotional upswings and downswings of the game.  Emotional stability requires extreme patience and discipline both in the short term and long term and requires the ability to use or insert logic into the decision making process.

The following year, I’m in a new apartment playing on Ultimate Bet.  It was a $215 6-max sit n’ go.  I don’t remember the hand, but I got rivered on the bubble.  My laptop goes flying down the stairway and crashes into pieces on the tile floor at the bottom of the stairs.  R.I.P. laptop #2.

The following year again, I am four tabling $2/4 no-limit and suddenly I lose internet connection.  I was also invested about $400 on the turn in a big hand when I “timed out” and “auto-folded” on the river because of the disconnection.  Conveniently, there was a baseball bat next to my desk.  R.I.P. laptop #3.

Fast forward to 2010.  I was already ITM (in the money) of an FTOPS (Full Tilt Online Poker Series) event and my AA loses to AK.  My intention was to do an air punch of some sort, but my intention was to stop my fist before it hit the screen.  Unfortunately, I wasn’t able to put the brakes on in time, and I smashed my screen.  R.I.P. Laptop #4.

My solution?  Another computer and two external monitors.  Now if I busted one screen, I still had two other screens, plus I could now multi-table without straining my eyeballs.  However, this was definitely not a solution to my underlying tilt problems.  That needed to be addressed ASAP.  I’ve at least graduated from laptops to smashing watermelons to release my anger.  If you have been following me or my friend Thi Nguyen (Instagram: @Tea_Newyen) a year ago, you probably remember our watermelon smashing session.  I convinced her to make the trip from Toronto to spend a week here in California for the WPT Rolling Thunder Event.  After we both busted, I took her to the back of my house and we smashed watermelons with a baseball bat.  I highly recommend this if you get to the point where you’re so tilted that you just feel like smashing someone’s head open.  (Sorry, I probably sound like a psycho right now LOL).  Anyways, below is my strategy for AVOIDING getting to that point, and if it doesn’t work, they sell watermelons for like $1.49 each at KP International Market (best deal I’ve found so far).

First, you need to understand variance.  It’s really quite simple.  Variance is the term used to describe how far your results spread around your expected win rate.  Poker is a game of skill, but there is a lot of short term luck in it.  We can’t control the outcome of the cards, which creates up and down swings.  If you’re expected win rate is $40/hour in a live game, but you end up making $100/hour over a 100 hour period, you are beating the variance.  If you only made $20/hour during that period (or worse), you are dealing with negative variance.  Variance is part of the game and you must accept it for what it is.  You have no control over it.  Successful players realize that their success or failure does not lie in the results of a single cash game session or a single tournament.  Each session is a continuation of one never-ending game and represents only a single data point over a long term graph.  Making the right decisions will pay off for you in the long run over a larger sample size of hands played.

The topic of variance is so huge, that there is no way I’m going to cover every form of it.  Keep in mind that different forms of poker will all have different levels of variance.  Tournaments are probably the highest form of variance while cash games are significantly lower.  This is why most full time players choose to play cash games over tournaments.  Even some of the most successful tournament players play a significant amount of cash games just to stay afloat during tournament downswings, which can last for months.  Whichever form of poker you enjoy playing most, there is one common way to beat variance.  Volume.  This goes back to the whole “long term” theory.  The more volume of hands or hours played, the more “data points” you create and the closer you get to the “long term” goal of success.  This is why multi-tabling 10 online tables at once can be a useful tactic in poker.  You can play 1,000 hands per hour, which would probably take an entire week playing one table in a live poker atmosphere.  The swings become shorter with the increased volume.

Great.  Now that we’re on the same page when it comes to understanding variance, we can now discuss how to recognize variance.  Imagine your recent downsing, and be honest with yourself.  Were you playing poorly?  Or was your downswing due to variance?  Often times during a downswing our emotions get involved and you may find yourself making decisions that you normally wouldn’t be making.  Similarly, you may be blind to the fact that you played poorly simply because you got rivered.  Here’s an example: You have 6♦5♦ on a Q♦T♦7♣ flop in a $2/5 No-Limit Holdem game.  The pot size is around $15 after four players limp and the rake is taken out.  Villain 1 leads on the flop for $15, Villain 2 calls $15, Villain 3 raises to $95.  You call. Turn is 2♦ and Villain 3 shoves for $300 and you call.  The river is the 7♥ and Villain 3 turns over T♥T♣ for a full house.  Yes, you got rivered, but did you play this hand correctly?  Your $95 call on the flop for a $140 pot was highly questionable as you are getting poor odds to draw to your flush, which may not even be good enough since Villain 3 could easily make a squeeze here with hands like A♦X♦, and for the same reasons, calling the turn is pretty questionable as well.  You played this hand poorly and got punished for it.  It doesn’t make a good bad beat story to your friends either so stop spinning it like you’re the most unlucky player ever.  You suck.  Variance is when you have AA all in pre-flop vs 66 and you lose.  You were an 80% favorite to win the hand and somehow that 20% caught up to you and it was out of your control.  Don’t worry about it.  You’ll replay that scenario in your life time hundreds if not thousands of times, and you should come close to winning about 80% of the time.

Insert some logic now.  If you are on tilt and no longer playing your A-game, you should probably quit.  It’s common sense but requires discipline.  Remember that this is a never-ending game and you can always come back tomorrow to play with a fresh mindset.  Poker rooms generally never close, and there will always be a game running.  There is absolutely no rush to get even by the end of the day.  Thinking in the short term will destroy your bankroll, trust me.  If variance is the reason for your current downswing, you must recognize that it is out of your control and that the short term is not important to your long term success.  If you still feel tilted from it, then take a break and smash some watermelons!

TAKE A BREAK AND EVALUATE YOUR PLAY

Hopefully you’ve cooled off after a good watermelon smashing session.  This is the time to reflect on your recent losing session to determine if there are any leaks.  One of the best ways to accomplish this is by taking notes during your session so that you can review the hand.  Pick a hand that you had a difficult decision, or a hand that you feel could have been played differently.  Run the scenario by a few friends (hopefully they are better poker players than you) and allow them to critique your play.  If you do not allow constructive criticism about your play, you will never learn.  Even if you completely disagree with their approach, you should at least try to make sense of why they are suggesting it.  Understanding how others think in this game will get you a step ahead of your opponents.  You must remember to not be results orientated when reviewing hands.  Just because you won the pot does not justify poor play.  The most common thing I hear, other than stupid bad beat stories, is when someone says “Man, if I called the turn, I would have hit my set on the river and scooped the pot.”  Cool story bro.

Sometimes it is also necessary to drop down a level in stakes.  Maintaining bankroll management is crucial to long term success.  Sometimes the drop down also helps to regain confidence or momentum.  Stay motivated.  Recognize that you are still a winning player, and trust in your abilities to overcome whatever downswing you dip into.  Whenever I find myself in a downswing, I like to look at my long term graph (hopefully you use an app to record all of your stats) and it motivates me to keep things in perspective.  I’ll just it one last time…THINK LONG TERM!

One thought on “Managing Tilt and Understanding Variance; “Smashing Stuff””