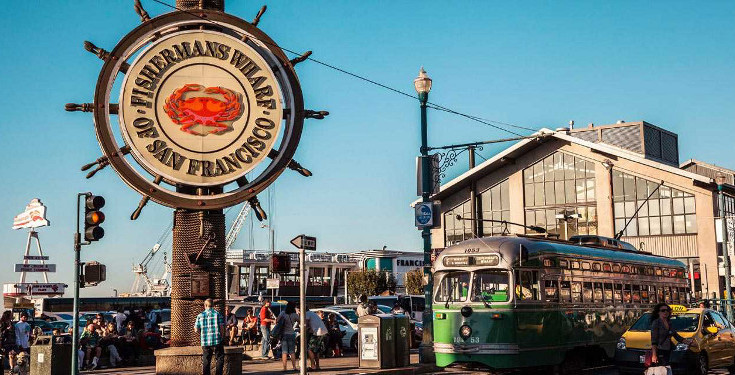 I became aware of San Francisco’s magical history at an early age. From our kitchen window perched high in the Oakland Hills, we could actually look down on both the Bay Bridge and the Golden Gate leading towards The City.

During certain times of year the sun would set directly behind the Golden Gate Bridge. While the brilliant orange glow would outline the silhouette of San Francisco’s skyline, the sun’s last rays would blaze through the span and light up the Bay’s entrance like the Land of Oz.

This is where I first learned about Fisherman’s Wharf. Five decades later, I finally appreciate what was at the end of Mother Nature’s spotlight: a world-class destination that still has its old world charm.

Commercial fishing boats fill a marina lined with Italian restaurants that provide the freshest seafood available. When you add a little sourdough and a bottle of wine, it becomes one of San Francisco’s most enduring images.

Thus, it was painted against this backdrop that I recently introduced Fisherman’s Wharf to our little poker paper. Such an impressive place deserves some good reading material.

Whenever I visit a restaurant at Fisherman’s Wharf I always try to sit by the window. I like to check the scores over some fresh sourdough while I watch the boats come and go. It relaxes me.

My favorite window seat resides inside Castagnola’s Restaurant where the main floor sits only a few feet above sea level. Over the last 100 years Castagnola’s has put together an impressive menu of steak, seafood, and pasta—but let us not overlook their lunch specials. I ordered the shrimp tacos.

My usual waitress, Helen, has been there for 35 years and served everybody from Joe Dimaggio to O.J. Simpson. Most recently she regaled me with stories about the great Italians who built Fisherman’s Wharf with their bare hands.

When the shrimp tacos arrived they were fat, succulent, and three to a plate. The shrimp were lightly battered, fried and served with salsa, avocado, and ranch dressing. Combined with a sea level view of the marina plus Helen’s war stories, my lunch special was a real bargain.

Next, I decided to visit another Italian restaurant located on the marina and known for serving their clam chowder in a bowl of hollowed out French bread.

Tarantino’s Restaurant has been around since 1946. They have their own crab stand and a sidewalk café. The place looks like it belongs on a postcard of Fisherman’s Wharf. My favorite part is the upstairs floor that offers an aerial view of the marina with the Golden Gate Bridge looming mightily in the background.

Sasha, my waitress, grabbed a handful of poker papers for the bar and seated me by the window where I could soak up the view. It was spectacular—so was the clam chowder—right down to the last soggy bite of my sourdough soup bowl.

Back outside again, I suddenly began to crave an Irish coffee. While it was only one o’clock in the afternoon, surely it must be five o’clock in Dublin, so I crossed the street and entered The Gold Dust Lounge.

The simple act of walking through the front door is like going through a time machine. Its 19th century décor includes pressed tin ceilings, and lots of chandeliers and mirrors. Since both my grandfather and great grandfather were gold miners, I thought of them immediately.

I said hello to Roy the bartender and set down a bundle of poker papers. Roy must have a bartender’s intuition because he seemed to know I was craving an Irish coffee. My last vestige of willpower was crushed when a fresh drink suddenly appeared in front of me without even having ordered yet.

That warm, blended concoction was so tasty it reminded me why I normally try to curtail my pursuit of the whiskey: I could sit at the Gold Dust all day long surveying the marina, watching the game, and enjoying endless Irish coffees with Roy the mind-reading bartender. I wouldn’t get any work done, but I’d have a great time.

Instead, I had my one drink for the year and reminisced about my gold mining grandfathers. However, I must state unequivocally that if you’re gonna fall off the wagon for one day, the Gold Dust Lounge is the right place to do it.

By the time I left the bar I was hungry again. I briefly thought about going to nearby Lucky Chances Casino for some tasty kung pao chicken, but that meant I would have to leave Fisherman’s Wharf. I wasn’t ready to do that. While many people like to stop at Madame Tussaud’s Wax Museum, stroll down Pier 39, or hop a boat to Alcatraz, I go to Fisherman’s Wharf for the food, plain and simple.

Next up was a place where the line of customers goes out the door and down the street. Darren’s Café is a first-class breakfast house as well as a Vietnamese restaurant. Their menu ranges from flapjacks to pho. I greatly enjoyed their overstuffed shrimp rolls with vermicelli and mint leaves wrapped in transparent rice paper. The peanut sauce was slightly tangy and very crunchy. Absolutely perfect.

David Kim is the owner/chef who makes a point to personally greet his customers whenever possible. Be sure to stop by, grab a paper and see for yourself why the line goes down the street.

There was still one place I had to go. I wasn’t going to leave town without stopping at Tanguito’s, the only Argentinean food truck at Fisherman’s Wharf.

Esteban, the owner, served me a beef empanada that I can still taste when I close my eyes and think about it. While we sat on the patio he also shared stories with me about bow-hunting on horseback in Argentina. I felt at home immediately, especially when he took a handful of papers and put them on his front counter.

Esteban proved to be a great chef, storyteller, and a gentleman. Next time you visit Fisherman’s Wharf don’t walk to Tanguito’s—run. You’ll be glad you did.

This article is dedicated to the late, great orthopedic surgeon Dr. Malcolm Ghazal of Sierra Pacific Orthopedics in Fresno.