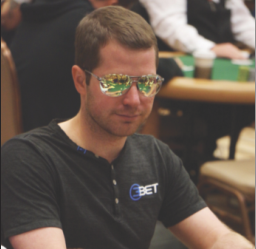 I recently had the pleasure of traveling to Prague for both the World Poker Tour and European Poker Tour events. Compared to the players in the United States, in Europe, the players are generally much more aggressive. The following hand, from a €1,000 buy-in event, beautifully illustrates how to take advantage of these aggressive players without opening yourself up to losing a bunch of chips when they happen to have a premium hand.

The blinds were 75/150. A relatively tight, aggressive kid who seemed to play a straightforward strategy raised to 400 from first position out of his 20,000-effective stack. The player in third position, a splashy, somewhat wild French guy, called. I decided to call with Ad-Qd in the cutoff seat. While most players would 3-bet before the flop, I called because I would be quite unhappy if the initial raiser continued in the pot because I expected him to only raise with premium hands from first position. Calling also has the added benefit of ensuring I get to see a flop in position with a disguised hand against the wild player.

The turn was the (As-6d-2h)-3c. The French guy bet again, this time 1,800 into the 3,425 pot. I decided to call because I feared that if I raised, he would be able to easily fold most of his worse hands. That being said, raising may have a bit of merit because my opponent may view a marginal hand, such as A-9, as the nuts and pile his stack into the pot. However, since I would have no clue how to proceed if he reraised or even called, I think calling is by far the best play.

The river was the (As-6d-2h-3c)-6h. My opponent quickly bet 3,200 into the 7,025 pot. Even though I could easily be crushed, I also beat a lot of hands, primarily worse top pairs. I made the easy call. I was surprised to see my opponent turn up 10-8 offsuit for absolutely nothing.

If I raised at any point throughout this hand, either my opponent would have folded his hand that was drawing dead or applied a huge amount of pressure, perhaps resulting in me making a snug fold with my strong, but not premium hand. By calling, I forced him to stay in the pot out of position with a hand that was drawing dead, which is always an excellent result. I also gave him the opportunity to bluff off a lot of chips, which fortunately for me, he did. The next time you find yourself in a pot with a strong, but not premium, made hand, consider calling instead raising, especially against players who are capable of attempting a bluff.

If you want to continue working on your poker skills, be sure to sign up for your free 7-day trial to my interactive training site, PokerCoaching.com.