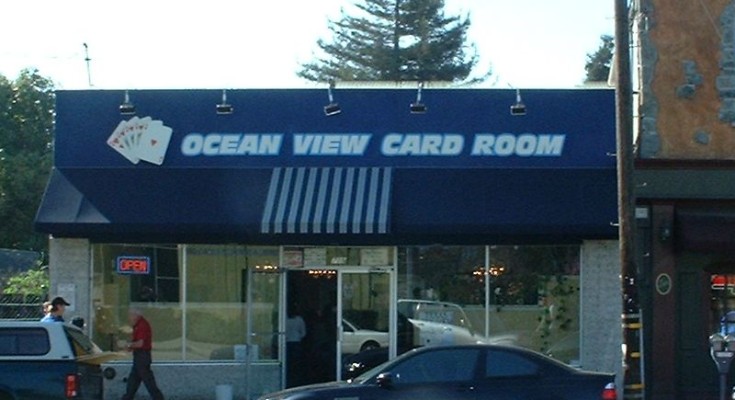 The CardroomMay 10, 2013May/June 2013, Poker StoriesComments Off on Memories of Santa Cruz characters

Every poker room has its cast of unusual characters—players, railbirds, and even some of the dealers. But nothing comes close to the zany crew we had from 1992 to 1994 in Santa Cruz.

Charlie owned the place and I worked there. It was a small, quaint, three-table joint downtown, not far from the famous Beach Boardwalk. On any given day it was an effort to round up enough players for one game, and of the few we had (including railbirds), most had no money.

There was “New York” Frank who couldn’t eat less than six powdered, jelly-filled donuts (they were free) while playing cards at the same time. The donuts first got squished in his hands, then on the cards, tablecloth, and chips. Some of donut would eventually land in and around his mouth.

The dealers would sometimes change decks every other hand.

Then, of course, there was “Crazy” Jay. Jay was somewhat of a strange bird. He would always have his trusted lucky necktie-wearing teddy bear with him which he would perch on the rail of the table while he played.

But before sitting down Jay would grab a Styrofoam cup, fill it to the top with sugar, then add just enough coffee to cover the sugar. Jay’s hands always shook violently. I guess that’s why he was forever dropping his cards on the floor.

“Electric” Al was a big man, but friendly and congenial. On occasion though, when he would suffer a bad beat, Al would walk around the room in circles muttering to himself. Then, as a finale to his ritual, Al would grab stacks of $1 chips, go outside, and throw them up on the roof.

Railbirds would scour the neighborhood for ladders at night and early the next morning, searching for a buy-in.

Who could forget Jimmy “O?” His eyes were constantly shifting around as if someone was out to get him. Every day we would hear the story of how somebody stole his stash of ice-cream from his former business.

He swears it was a conspiracy—an inside job. He may have even contacted the FBI, but they never would return his calls.

Before Charlie sold the place and moved on, we tried once to serve a free morning breakfast to the players. At one point I was cooking eggs and potatoes outside in the back and serving the food to the players inside.

I needed to run to the grocery store and left one of the railbirds to watch the grill. “Don’t cook anything,” I said. I returned a few minutes later to see fire trucks with their hoses dousing out the palm tree that once stood out back, along with the corner of the building which was fortunately saved.

There was never a dull moment at the Ocean View. Every cardroom has it’s share of colorful characters and that’s what makes people keep coming back for more. The entertainment … and the chance to win a little money!

Pat Kelley has been a poker dealer for over 40 years and has worked at over 40 casinos. He currently lives in Saratoga and is a dealer at The Palace Poker Casino in Hayward. And yes, he’s still busted.

Previous PostReciprocity: The key to winning poker Next Post500 Club giving away $100,000 in cash, cars