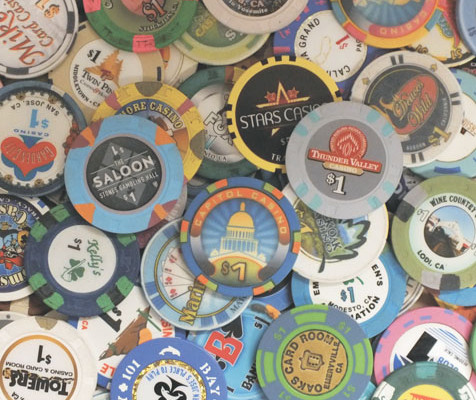 Do you ever find yourself sitting at a poker table feeling a bit grumpy and surly? Maybe you’ve taken some bad beats or your dog just doesn’t like you anymore. Every now and then I do, and I always try to check myself and readjust my attitude.

I’m not talking about avoiding tilt. Tilt is more about anger and frustration affecting your decisions. The absence of tilt doesn’t mean you’re not sitting there like a big Eeyore expecting everything to go wrong.

Obviously your inner emotions are not going to actively change the next card the dealer turns over, but it certainly does seem that when you expect things to happen a certain way, good or bad, they usually do.

I believe philosophers call it the Law of Attraction. When you’re happy and feeling good you just seem more likely to hit that river card (or at least avoid the other guy’s flush). When your face is snarled up and you’re expecting things to go wrong, it seems like they usually do.

So why not be more like Pooh Bear and expect things to turn out just fine. They may … and they may not. But either way you’ll be a lot more pleasant to play with and you and everyone around you will have a much better time.

I dropped in at Thunder Valley Casino in time to play one of their satellites to the Poker Night in America Main Event. It was Thursday morning and the nearly three-hour drive to Lincoln had made for an early start to the day.

At least that’s what I used for my excuse when an ugly combination of bad cards, bad decisions, and bad luck had me out not very far into the second level. All that driving only to get eliminated quickly was painful, so I went for a walk throughout their lovely facility.

After cooling off and settling down I decided to take advantage of the re-entry option and give it another go. This time I did much better—but still not good enough—and was eliminated from my shot at the “big time” once again.

I did enjoy discovering that I was seated next to long-time successful NorCal poker player Cheri Svenson, and we had a nice chat while I watched her amass chips. It was also good to see Dan Ross from holdemradio.com there to cover the action.

I went to the food court for a bite to eat, then headed back to the Poker Room. They had a seat open in $1/3 no-limit so I took it while waiting for $4/8 limit. Despite playing tight and making it obvious I was doing so, when I went for the three-barrel bluff I got called anyway. Lately I find that $1/3 no-limit has a lot more in common with $3/6 limit than most people think. When I got called for $4/8 I jumped at the chance and spent the rest of the evening making up ground from the no-limit game.

I did get a chance to take a break a few times and check out the filming of the Poker Night in America cash game. They had set up right near the front door and hotel desk, so that everyone coming in that way would see that something special was going on. Great planning I thought.

You could get pretty close and watch Phil Hellmuth, Mario Ho, and the others chatting up a storm while they played, just like they do on TV. From my perspective, PNiA seemed like a great fit for Thunder Valley.

The next morning I went over to Citrus Heights to see our old friends at Stones Gambling Hall and play in their Friday morning tournament. I was told we could expect about 60 players, but by the time the re-entries and late players had all been added we made it over 100. A pretty good turn out for a Friday morning.

Your humble Ambassa­dor had quite the up-and-down experience in this event. I won a few big hands early on and was sitting on a pretty big stack. Then that started to get whittled down until midway through the event I took a bad beat and was pretty decimated.

I hung in there though, and after a while I managed to return the favor and sucked out on the guy who took most of my chips. I was back in the hunt! Slowly but surely I chipped back up and the next thing I knew we were at the final table.

There followed some horrific bad beats, but luckily I wasn’t involved in them. The worst run was when the player who was the clear chip leader lost on a suckout, then played a hand he probably shouldn’t have, then got dumped on again and went from first to out in fifth place. It didn’t take the remaining players long to decide on a four-way chop which put enough in my bankroll to pay for the previous day’s entries with a bit to spare.

It may have been an up and down experience, but at least it ended on an up.

Saturday morning at Capitol Casino is always a pleasure when I start with breakfast at their café. They make some mean French toast!

They were already fairly busy when I got there for the 11:00 a.m. tournament and the place only started to hum even louder as the start time approached and the tournament players filed in.

As usual Mark Pritchett was there to keep things running smoothly and once again things were going fairly well. I had to survive some scary moments and hit some hands (of course … this is a tournament after all), but the poker gods were with me again as I navigated my way through the field.

It seems to be what virtually all tournaments come down to: play a solid game, have enough chips to survive when you get it in good and lose anyway, and get lucky when (and if) you have to.

That’s exactly what happened here as I found myself at the final table for the second day in a row. Again there was a holdout against the early chop so we continued to play and, though it took some time, we got down to six.

I was in the big blind when everyone folded to the button who min-raised. The small blind called and I checked with J-9. With a flop of J-9-5 I bet, the button folded and the small blind check-raised all-in. The only hands I could think he would have were an overpair (but wouldn’t he raise preflop?), a straight draw, something with a jack, or 5-5.

At this stage of the game there’s no folding top two pair anyway so I called. Sure enough, he has the 5-5. I’m out in sixth place and while I’m collecting my winnings the rest of them are chopping five ways.

At least I wasn’t the chip leader three hands earlier!