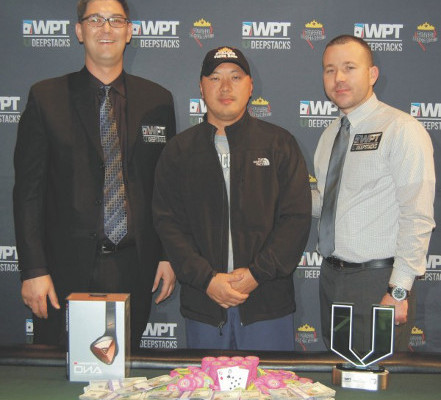 Three full days of play ended with the final five players agreeing to an equity chop, as Josh Moua took home the top cash prize of $36,341 in the 2015 WPTDeep­Stacks Main Event at Turlock Poker Room & Casino.

The $1,100 buy-in drew a Turlock-record 175 entries that spanned two Day 1 entries and a full 10 hours of play on the final day on May 17. There were 68 entries on May 15 for Day 1A, followed up with 107 more entries on Day 1B. Turlock Poker Room ran satellites far in advance of the series, with 95 players winning seats into the Main Event.

Dana Muse was the final table chip leader six-handed when players came back from their dinner break. Moua and Adrian Bolanos clashed in a huge hand that left Bolanos out in sixth. A few hands later, with Moua having about half of all chips in play, the players agreed to chop up the prize pool, then play it out for the WPTDeepStacks prize package including an entry into the WPT DeepStacks Championship event in Calgary, Alberta.

“I was being patient all day, my pocket aces held up and I figured that was a pretty good sign,” said Moua about his chances to run deep on the final day. “I am thinking about going to World Series (of Poker) this year so this is a pretty good start.”

A big clash late on Day 1A between Ed Miller and Mark Johnson—where Miller flopped top-two and Johnson flopped an open-ended straight that got there on the turn—propelled Johnson to a huge chip lead that he carried well into Sunday’s Day 2 while Miller was eliminated two from the money.

Johnson, however, ended up on the wrong end of a few different hands involving Miguel Lopez and finished the day in ninth place for $3,252. Lopez was just two big blinds shy of Aram Alexander for the chiplead as final table play began. Lopez was eventually eliminated in seventh place ($6,170), while Alexander took fourth place money ($21,068) in the equity chop.
Cheri Svensen won Event 2, $100 Hold’em, then capped off her series with a second-place finish in Event 8, the $150 Turbo to win the Series Championship title, earning an entry into the Turlock Poker Room Memorial Day tournament along with a variety of WPT DeepStacks-related items.

“The only reason I came tonight was to try to win the series championship,” said Svensen, who added she looked at the points standings and wanted to take one last chance to win.

Main Event players were treated to a player’s party on Saturday night, with hors d’oeuvres from 10 East in Turlock, and a drawing was held with one player winning a seat in the WPTDeepStacks $300,000 guarantee later this year at the Bicycle Casino in Los Angeles.

Next up for Turlock Poker Room is the PokerStars Pro Tour event on Aug. 9 at 12:00 noon, featuring visiting Poker­Stars Vanessa Selbst and Daniel Negreanu.