Home May/June 2015 Mrs. A takes over the hijack seat 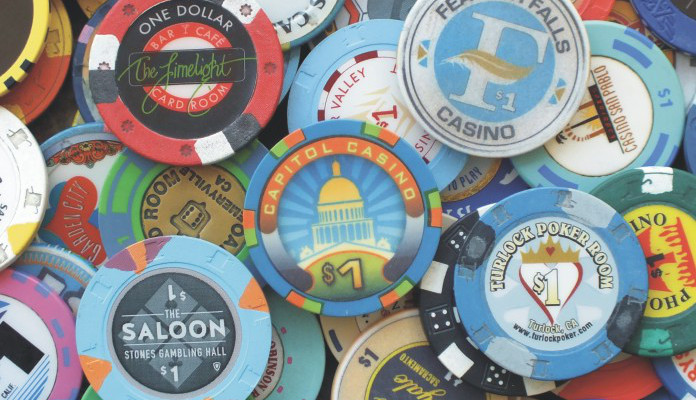 Mrs. A takes over the hijack seat

Susan RappMay 10, 2015May/June 2015, NorCal Poker AmbassadorComments Off on Mrs. A takes over the hijack seat

I decided this column needs a different perspective for a change, so while Mr. A is busy dealing with non-ambassadorial matters I have taken it upon myself to steal his column just this once. (Then again, no promises it won’t happen again.)

Since several years spent pursuing higher education severely limited my opportunities to accompany Mr. A on his poker junkets, I was more than ready to hit the road and experience a long weekend of nonstop NorCal poker adventures. To add an element of friendly competition, we like to see who will be the most successful overall on a particular road trip.

While Mr. A did a little business, I took advantage of happy hour at Sammy’s restaurant and bar, conveniently located in Stones Gambling Hall. Nice atmosphere, delicious appetizers, an extensive wine list, and local brews on tap.

We got some great deals on the beer and appetizers, including their mini Kobe beef hamburgers, Thai chicken satays, and truffle fries. My only regret was not getting the mini duck tacos!

I would come to Stones just for the food, but I must admit that sampling the local cuisine is one of the big perks of these trips.

Our search for a Friday night tournament gave us a great reason to visit The Limelight in Sacramento. Poker manager Robert and staff were very welcoming and especially helpful resolving the matter of getting our car parked appropriately.

The turnout for the tournament was small (apparently it’s a fairly new addition to their offerings), but I really enjoyed the cozy, friendly atmosphere at our table. It was a good warm-up for me, and the evening ended with a four-way chop that included both me and Mr. A. Score: Tied 1-1.

Morning found us back at Stones for breakfast where I actually got Mr. A to share one of his warm crispy mini donuts, followed by the Saturday morning tournament. It was a big field, and with luck in short supply, I decided patience would be necessary to make much headway. Mr. A and I both lasted til the break, but next thing I knew he was out.

I was making steady progress until my A-K hit trip aces on the flop, but my all-in couldn’t push a pair of 10s out. Of course he rivered a 10, leaving me crippled (remember I said that luck was in short supply). I’m out soon, but stayed around longer than Mr. A. Score: 2-1 (me).

Looking for consolation and redemption, we headed up to Oroville and Feather Falls. Fortunately we had enough time to sample several of the offerings from their on-site brewery and enjoy some delicious pizza.

Thusly fortified, we made our way to the poker room for the Saturday night tournament. Four tables and re-buys/add-ons made for an attractive prize pool. After one re-buy for me, Mr. A and I both make it to the final table. It wasn’t too long before I was dead to a two-outer on the river for the third time in one day, going out just short of the money. On the bright side, Mr. A is part of a four-way chop. Score: 2-3 (edge to Mr. A due to my re-buy).

The Sunday morning tournament at Capitol draws a good crowd, and I felt overdue to get a little traction. Since I find it very distracting to try and eat while I’m at the poker table, I convinced Mr. A to join me for breakfast before we got started.

We arrived at the tables a little late, but the structure was gentle so it didn’t cost us too much. It was also favorable for my generally patient approach. I wind up folding a lot but made it to the break in good shape. Mr. A hit some choppy water early and had to start over, but he hung in there. I decided to take advantage of the add-on for good measure. Things began to go downhill fast when my pocket queens wound up against pocket aces and pocket kings. Mr. A had better luck but came up short of the money. Score: 2-4.

I was looking for redemption at our final stop where we played a satellite for the upcoming WPTDeepStacks Main Event at the Turlock Poker Room.

They have expanded a bit since my last visit and added a new bar and lounge with a rustic chic décor. It’s still the same friendly staff I’ve become accustomed to, which makes this one of my favorite poker destinations.

Unfortunately, my good opinion of the room is not returned by the cards. It was a very chilly deck for me and the level of play was good enough that it didn’t pay to limp and hope for something good to happen. Apparently things didn’t go much better for Mr. A, who made a relatively early departure and headed to the cash game.

Three plus hours of patiently folding got me into the top 40, but the blinds got big and I needed to play some hands. I felt pretty good when my K-Q suited was up against 7-8 suited—until the flop brought both a 7 and an 8, plus another 8 on the turn. Time to go home. Final score: 3-4 giving Mr. A the victory, at least until the next time!