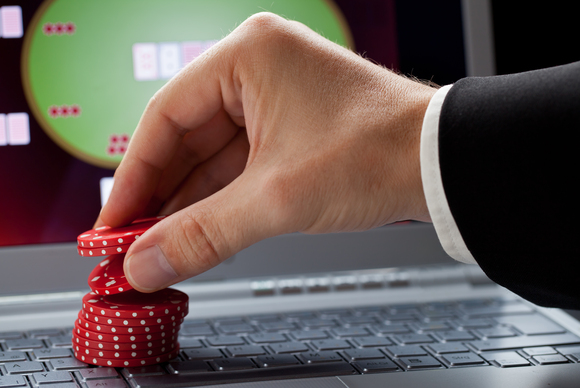 After spending a week in Las Vegas at the WSOP I couldn’t help but notice how relentlessly they were pushing wsop.com’s online poker game.

With Nevada being one of a few states to formally legalize online poker within its borders, the WSOP brand seems to be pushing the concept hard. On this venture I wish them the best of luck.

Thing is, I don’t travel to Vegas to play online. I go to play in tournaments that I can’t get every day at home as well as find a bigger mix and range of cash games. Online poker is something to do at home, when it’s convenient.

I have also always maintained that online poker was the driving force (along with television) of the poker boom we had ten years ago. It’s not a coincidence that when the feds started trying to shut it down the TV shows lost their biggest sponsors and the cardrooms and casinos lost their best source of new players. It was so easy (and cheap or free) to learn poker online and you could advance to bigger games or live casinos at your own pace and within your comfort zone.

So the feds called it “gambling” and shut it down with a cheap trick of midnight legislation called the UIGEA. After all, we can’t have people betting on things, can we?

Apparently it’s okay for me to “pick a team” in fantasy sports online (for money) and then if I do well I get more money than I put in. If I do poorly my money might all be gone. But that’s not gambling, that’s sports knowledge.

I can open an account with any number of online brokerages and “buy” a stock that I think will increase in value. When it does I can “sell” it and have more money than when I started. If it loses value I might have to give up on it and take a loss, hoping to make it back on my next “purchase.” But that’s not gambling, that’s investing.

More examples could be made, but their common element is that, despite what you do or know, their success or failure is ultimately in the hands of outside forces beyond your control. Your best ball player might break a leg or your can’t miss stock might tumble over a scandal.

Certainly there are degrees involved, but it’s along the same lines as your nut flush being vulnerable to a rivered full house.

But forces are at work trying to restore your right to be free to make your own decision about whether or not to play. At the same time others will do anything within their power to make sure you don’t get that opportunity, either out of a desire to impose their morality on you or to use the political system to gain or maintain a business advantage.

The Internet Poker Freedom Act was recently introduced in the House by Rep. Joe Barton (R-Tex.) and it would empower the federal government to license and regulate websites offering poker.

A few days before that Senators Lindsey Graham (R-S.C.) and Marco Rubio (R-Fla.) introduced The Restoration of America’s Wire Act which would turn back the clock and make all forms of online gambling illegal.

In California, for seven years they’ve been talking about allowing in-state online poker. In late June there was a legislative hearing featuring Poker Player’s Alliance Executive Director John Pappas as well as a board member of Sheldon Adelson’s Coalition to Stop Online Gambling. I’m sure fine arguments were made and nothing of any note was decided.

In May an Internet poker bill passed out of committee for the first time since 2008 but, according to the Sacramento Bee, “It still has a long way to go. AB 431, a shell bill meant to keep the process moving, contains temporary language that will be amended if a satisfactory proposal is negotiated this summer.”

Who knows how much longer all this will go on, both at the state and federal levels? My head is still spinning, and I feel only marginally more informed than when I started trying to figure out the current state of online poker.

And all I wanted to do was play a game!