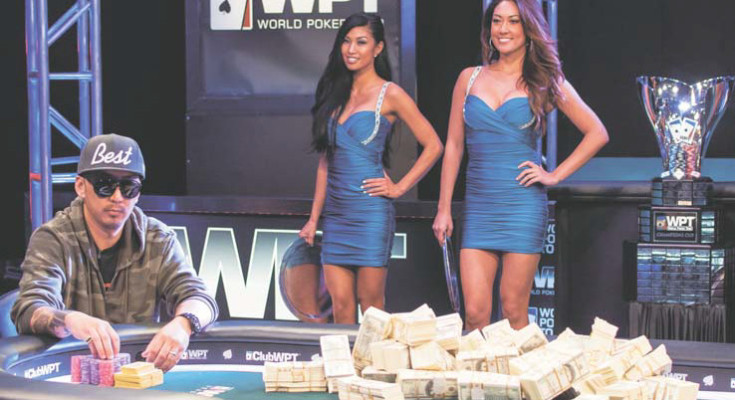 After five long days the Bay 101 Casino’s annual Shooting Star World Poker Tour event concluded on March 8 with the title going to Kai Chang from San Carlos, Calif. Along with having his name engraved on the WPT Champion’s Cup, he also receives a buy-in to their year-end championship tournament and a payday of $1,138,350,

The real NorCal story though, was the great play of Sunnyvale resident and regular working stiff Joe Nguyen, who beat out 641 touring pros, local pros, and amateurs to claim second place and $666,740.

Reflecting on his accomplishment, Nguyen said, “[It was] probably one of the greatest experiences of my life. Friends and family, local, the whole environment. I mean the staff … I knew lots of the staff members. The dealers. Yeah, it was great. I wish I could have picked up the win in my hometown, home base, but I was blessed with second place so I can’t complain. But I will be back for the Shooting Star next year trying to go for the win.”

Tournament director Matt Savage said, “I was amazed and thrilled by the turnout this year at the Bay 101 Shooting Star, with 643 entrants nearly doubling the previous year. The support of the Bay Area players and the traveling pros was unlike I have seen in years and comments by the players were all positive.

“The tournament dealers and staff did an excellent job and I am proud to call my hometown Bay 101 Shooting Star the most unique, exciting tournament in poker. I believe the buy-in reduction to $7,500, the excellent satellite program, and the single re-entry was what made the tournament such a huge success.”

For Nguyen, a telephone repairman when he’s not hitting the felt as a championship-caliber poker player, it was definitely a special experience. He started playing poker with a few cash games back in 2006, then, like many others, made the transition to tournaments. He played his first Shooting Star in 2007, winning a seat via satellite as he has every year since (except 2010 when a work conflict prevented him from participating).

While a regular at the Bay 101’s tournaments, he said he also gets around to some of the other casinos in the region. “Pretty much the Bay Area. I play at Lucky Chances. When Garden City was around I played Garden City late nights. Lucky Chances when they had that big series. I do go to Vegas here and there but not too often.”

He said that he developed his style and approach to the game from watching TV, talking to other players, and good old-fashioned experience.

“As far as tournaments, I would just talk to a couple guys locally that are actually really good. Just pick up some pointers from them. To tell you the truth I really actually never picked up a book and actually read through the whole thing. I was given a couple books, but I just never read any poker books myself. It was pretty much just by playing and talking to friends and going over different things and scenarios. Actually one of my good friends is Rellie Sigua. He’s back-to-back Player of the Year I guess, two years in a row. So I talk to him on a regular basis.”

Relating his experience at this year’s Shooting Star, Nguyen said that Day 1 started pretty badly. After building his starting stack of 30,000 up to 65,000 he wound up ending the day with only 36,000.

Day 2 had its ups and downs. After building his stack up to 170,000 he took a bad beat when his pocket queens lost to a rivered set of nines, leaving him with only 50,000. “After that I was able to grind back and get some chips and that was actually after we table changed to the actual televised … I guess the table that had the little live cam where Antonio [Esfandiari] was. I was able to build about 120 and ended that second day with over 500K, just playing really well against Antonio and Jason Somerville.”

Returning for Day 3 there were 44 players remaining. The money bubble had long since burst the day before and they would play down to the final six for the WPT’s televised final table.

“I was able to play really well to the final table. It was an awesome day. You know what, I actually really never had a sweat moment. As far as that day, day three, when I had that 500,000, I pretty much was just playing a rock-solid game. At any point I don’t think I was ever at risk at all. I was pretty much just steadily getting chips.”

After making it to the final table of six, Nguyen got to experience what it was like getting ready to be on television. “It was crazy. It was kind of a little bit nerve wracking at first. But I slept good, woke up, and then going in at 12:30 I had to go get makeup done which was funny. I guess they didn’t want us to shine. I calmed everything down and did the interviews for about 15 to 20 minutes and after we were done got out of there about 1:00 and pretty much waiting until 3:00 or 3:30 when we came back in to start the game.”

Nguyen was in sixth place when the final table began (2,175,000 chips), but only chip leader Paul Volpe had significantly more than he did with 5,525,000. The title was anyone’s to take at that point despite well-known pros Volpe and Eric Seidel having the two biggest stacks.

“I knew going into the final table there was a couple very active players. Paul Volpe, he’s very active and so was Kai Chang, the guy that won it. He played a lot of hands, so I knew that it was getting in the mix. So I would actually kind of stay away until I picked up some big hands. Not that I’d get too active with them. I let them fight it and let the chips disperse to get everybody even and then I started opening up my game. Once there was a closer to even playing field, then I actually started playing a little better. It was pretty cool.

“I played it as if it was just another tournament, but my eye was not even on the prize money, it was actually on the win for the WPT champion. Just the win was my goal, and try to win the title.”

When they got heads up Chang had nearly a two-to-one lead over Nguyen. As is the nature of heads-up play, this could drag on for hours or be over very soon. It turned out to be the latter as they only played six hands and it was all over.

He said he loved being the local guy at the final table with all the extra cheering that meant. “Oh, yeah. Everybody was there. I had actually my brother-in-law, sister-in-law, my wife came up. A lot of friends and family ended up showing up from all over California. Man, that just juiced me and pumped me up actually to get in the game. I felt like I was in a boxing ring. Just pumping me up and the adrenaline. Just trying to outplay my opponent and get to the end. It was just awesome.”

Now that it’s all over, Nguyen says its pretty much back to normal for him as he returned to work, although a lot of bills got paid. He said that he’s planning on more family time with his wife and kids. He does have his eye on a few upcoming WPT events as well as taking his first stab at some WSOP tournaments, including the Main Event. “Going in and feeling this good, I mean, I feel unstoppable.”