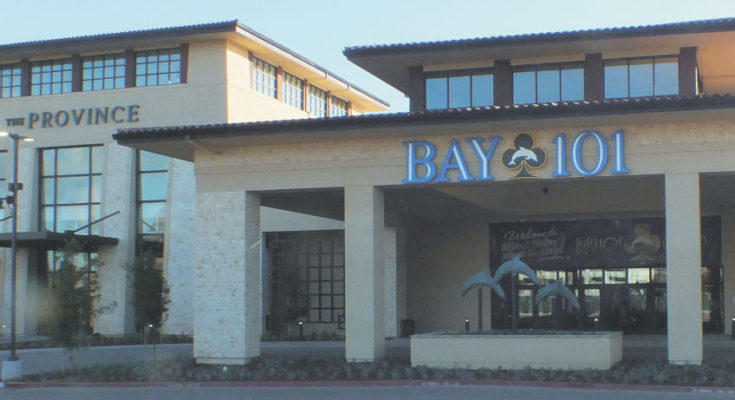 Normally at this time of year, The Cardroom is busy helping Bay 101 Casino to promote the WPT Shooting Star tournament in early March. Unfortunately, the event won’t be held in 2018, so we spoke to Sam Quinto, the assistant casino manager to find out what happened and whether we can expect it to return. Here’s what he had to say about the Shooting Star event and the new Bay 101 Casino in general.

We recently moved into a brand new property, and in discussions with the World Poker Tour we had some concerns on a couple different things. We just wanted to get our footing together. We have a restaurant group now running the restaurant and doing our casino dining. We wanted to make sure that if we were going to host a Shooting Star that we would make sure that players were going to be taken care of.

Over the years, players were used to our buffets in the morning and in the evening. We treated them pretty well. We didn’t have our hotel partner solidified yet either. We came to a mutual decision with the World Poker Tour basically to take a year off.

We’re in negotiations for 2019, and we still have a very close relationship with the World Poker Tour. We still talk with Angelica Hael and Adam Pliska quite often. I know they want it. I know they’ve gotten a little bit of heat from fans about the Shooting Star not being on their schedule, and I know from our end, our locals definitely expressed their displeasure that we weren’t going to host a Shooting Star, because for Northern California, this was their tournament.

But we really didn’t want to do something half way. We had some spacing issues in our poker room initially. We’re working on that as well, expanding the space, so it’s more comfortable to sit in. Our food and beverage department is getting better, but it’s a young group of service people, and we want to make sure the food quality is there before we host a world-class event like the Shooting Star.

In the end, ownership felt it was best just to take the year off and then get everything right with the new building and make sure that when we are able to do it, we do it right. I fully anticipate that we are going to be having the Shooting Star next year.

I think the Shooting Star tournament put Bay 101 on the map. It’s our signature event. I don’t believe that we’re going to ever let go of that event. I know other people were talking about that we should move the event to another property, but no. We’re not going to do that. This is Northern California‘s event and as much as we regret not hosting it this upcoming year, we do anticipate that we will be hosting it for years to come in the future.

I also want to let players know that we’ve expanded our poker area. It’s definitely much more spacious. If you were here for the grand opening and you saw it now, you would go, “Wow. There’s so much more space here now.”

We’ve got more tables and we’ve even made it more spacious. There were definitely issues where people were bumping into each other, and the room just seemed a little too tight. We’re listening to our players’ concerns, and we’re definitely spacing the tables out better. We actually moved more tables out of the main poker room, moved it across the hallway. The lounge area that was across from the bar? That’s all poker now. It’s definitely more comfortable for the players.

We’re trying to listen to our players and give them what they need and that’s additional space and better service. It’s funny that we built a completely new property and then once we moved in, we’re kind of remodeling as we go along.

We’re also going to be making an announcement shortly about our tournaments and plan on expanding upon the number of tournaments that we have right now. We’re probably going to be adding a couple more days. We’re discussing right now the possibility of going back to seven days a week, doing a once-a-month $550 event that used to draw over 250 players. We’re looking into next year, some time in 2018, building upon our daily events and expanding the schedule.

Previous PostQuantum has huge prize pool Next PostWhat is ICM?