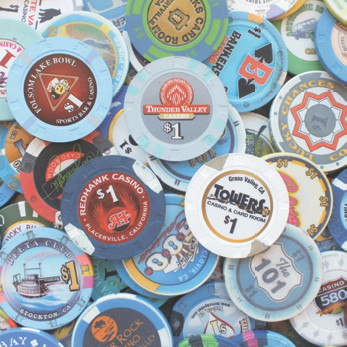 One more shot at WSOP Seniors

By Randall Rapp
When June arrived I realized that meant it was time to hustle off to the Rio and take my annual shot at the WSOP’s Seniors Event. I was two for two making the money the last couple of years, so I had to fight off the nagging feeling that doing so a third year in a row was highly unlikely.
Sure enough, I started off playing like I was in a deep stack tournament with short levels instead of a short stack tournament with long levels. They only give you 3,000 chips to start, but each round is a full hour, so playing a lot of hands quickly is a bad idea.
Naturally, that’s exactly what I did.

I donked off chips like I was in a $40 turbo. During level two I was all-in at least five times with about 15 big blinds and fortunately never got called. Then on the last hand before the break I flopped a straight and my shove got called by two players. One had no real chance, but the other had the flush draw, so I had two cards coming that I would prefer to be red.

I got what I wanted and tripled up, back to slightly more than my starting stack. I made a conscious decision then that I had better wise up and be a lot more selective if I was going to have a chance to make it through the day.
Naturally, that’s exactly what I did.

After another hour or two I was close to the chip average and managed to stay near it for the rest of the day. When we returned for Day 2 the money bubble burst after about 45 minutes and I had done it again.
Yeah, I was feeling pretty darn good about myself. In three years I had entered exactly three WSOP tournaments and cashed all three times. I’m not saying that’s any kind of record, but it sure did feel like one. Eventually the cards ran out on me and I was out in 151st place out of 4,425 for a $3,504 payday. Not exactly a gold bracelet, but not a bad couple days work either!

Thunder Valley Casino
Lincoln
Mrs. A and I headed up to Thunder Valley to play in their second Saturday $125 tournament. They had a great turnout of well over 100 players and an interesting mix from “who cares” gamblers looking to re-enter and were tossing chips in with any two cards, to tight and passive players looking for a big opportunity.
I usually fall somewhere in the middle in this kind of event. Sometimes it works, sometimes it doesn’t (as most of you probably know already). This time it ­didn’t.
It was too late to re-enter so I went hunting for an amusing video slot machine (I have a particular Lord of the Rings weakness for some reason) while Mrs. A continued to make a run in the tourney.
When her short stack finally took the worst of it we went in search of sustenance at their wonderfully varied food court. She picked Chinese while I grabbed the pizza I’d been craving.
Despite our lack of tournament success, we had our usual great time at Thunder Valley where they really do seem to have something for everyone.

Towers Casino
Grass Valley
We headed up the hill to Towers Casino with enough to time for a couple of quality beers at their lovely bar while we waited for the Saturday Night Bounty Deep Stack tournament to begin. For $60 you get 8,000 chips with 15 minute rounds and everyone has a $10 bounty on their head.

I started off slow, but managed to “keep hanging around” as Teddy KGB might say. I never had a big stack, but no one managed to claim my bounty either. In the meantime I picked up a couple of bounties of my own.
As we got to the final table (we started with about 30 players) I was still one of the short stacks, but no one was able to pry the chips away from me as we went from nine players down to five. Still I was the short stack and only four would make the money.

When two of the bigger stacks clashed on a big hand I knew I had squeeked one past when no one seemed to be looking. The big stack announced “no chop” so we kept on playing. It wasn’t long before I doubled up and the big stack had taken a couple of hits. He was still the big stack, but even my short stack wasn’t that far off and the blinds were nice and big. Now a chop didn’t sound so bad, as all four of us took home second place money of $460 (plus the bounties for ourselves and any others we had acquired).

Red Hawk Casino
Placerville
On the way home the next morning we stopped by Red Hawk Casino to play in the 10:00 a.m. tournament. For $40 you get 4,000 chips with 15 minute levels so this one was likely to be a case of “go big or go home.”

Before it started though, we made it over to the Two Rivers Café for a quick breakfast. Not only was it quick—you go up to the counter where you order and pay, then they bring it to your table—it really hit the spot too.

Back to their cardroom in plenty of time we took our seats and the tournament commenced. I had my ups and downs over the first several levels, but all it took was one cooler and my stack was down to the nubs. After shoving with a hand that was marginal at best I was back to the machines while Mrs. A once again won the last longer side bet.
Instead of hitting the machines though, I decided to have a go at the Ultimate Texas Hold’em table game. I couldn’t believe it when I was consistently getting hands. By the time Mrs. A came to find me (having had no joy at the tournament either) I was up about $200 so we were able to both go big and go home!