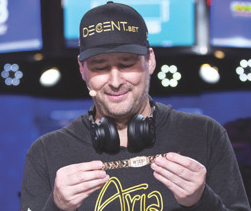 The man with more World Series of Poker Bracelets than anyone else picked up another towards the end of this year’s festivities. Phil Hellmuth, Jr. of Palo Alto laid claim to his 15th WSOP title. After the win, he looked over at his wife and said, “Honey, am I dreaming?”

It had been a rough haul in the 2018 WSOP for Hellmuth up that point, as he was dealing with atrial fibrillation and had made only five small cashes. He also had the poker community on his case over some especially bratty behavior, mainly due to a hand he played against Alex Kuzmin and Massachussets firefighter James Campbell.

The short version is that Hellmuth started a rant in a multi-way pot, which can affect other players decisions and is a no-no. During the rant he swore a lot and insulted Campbell.

“When I went to bed that night, I looked at social media and realized I may have affected his tournament,” Hellmuth said later. “I was going to bed but instead, I went to the couch and spend two hours on social media. I couldn’t sleep, I felt so bad. I didn’t know how to handle it. The fact is, when I busted out from the Main Event the poker room was cheering. I was crushed. I was like ‘oh, my God, what did I do? Everyone is against me.’ It felt like such a low point for me in my career.

“Then I said: the only thing I can do is buy him into the Main Event (in 2019) and that’s gonna make me feel better. So, I bought him in and I went from 400 negative tweets to 600 positive tweets in one day. It’s the swingiest week in my life; from people cheering because I busted to, I think, a lot of people cheering that I won.”

When heads-up play began in Event #71, Hellmuth’s opponent, Steven Wolansky, held a three-to-one chip lead. Hellmuth was able to even things up, but Wolansky soon was slowly but surely chipping his way to another lead.

Hellmuth said, “He wouldn’t give an inch, I know he wouldn’t give an inch. I had to start thinking about how I wanted to handle this. I thought, I have to try and steal more pots against him to give myself a chance because he’s just not giving a chip away. He’s making it really tough, and I have to just keep playing my best poker until the end, and maybe something great will happen.”

Hellmuth later took the lead back when his all-in with Kd-10d was called by Wolansky with Kh-Jh. No diamonds showed up, but a 10 on the river was the three-outer that gave him the chip lead for the first time heads up. Soon it was Wolansky who was all-in with A-9 against Hellmuth’s pocket 3s. A three on the flop gave him what turned out to be an insurmountable lead and WSOP bracelet number 15.

Asked what the victory meant to him, Hellmuth said, “It means everything to me, because my life is poker, number one. Number two, I’m trying to spread positivity to the world. I want to be remembered in two ways: one, having 24 bracelets and number two, starting the positivity movement and having a lot of influence on people’s lives. Every day, people tweet I read your book, it changed my life. Once I realized I could inspire people—yes, I’m still the poker brat—I took that seriously.”